The candidates took the stage for the final time at Belmont University in Nashville amid a re-surging coronavirus pandemic, racial divide, and a fluctuating economy. Things were kept civil for the most part but there were some flubs.

Trump and Biden jab over COVID

“We’re learning to live with it. We have no choice,” Trump said. “We can’t lock ourselves up in a basement as Joe does.”

Mr. Biden responded by pointing out over 220,000 Americans have died from the virus thus far and saying that alone should be a reason President Trump should not be re-elected.

“Anyone who is responsible for that many deaths should not remain president of the United States of America,” Biden said.

When asked what he would do to combat the virus, the former Vice President said he would want everyone to wear a mask, create programs for rapid testing, and create national standards for reopening schools and businesses.

“We’re in a circumstance where the president still has no plan,” Biden said. “I will take care of this.”

Dancing around the issue of race

When the topic of race came up, Mr. Trump tried to pivot despite moderator Kristen Welker’s best efforts to shift the conversation back to the topic. The President deflected on the race issue dividing America and tried to bring up the reports of a laptop allegedly belonging to Hunter Biden, allegedly contains embarrassing messages and photographs.

“A black parent no matter how wealthy of poor they are, has to tell their child when you’re walking down the street don’t have a hoodie on,” Biden said.

Mr. Biden then mocked Mr. Trump’s self-comparison to Abraham Lincoln, which Trump tried to turn into a “senior moment” for Biden but it fell flat.

“Abraham Lincoln over here is the most racist president in history,” Biden said.

Biden has acknowledged his errors in drafting the 1994 crime bill while hitting Trump for his own attacks on minorities. That prompted a truly shocking rebuttal from the President of the United States.

“I am the least person racist person in this room,” Trump said.

The fight over immigration

For the first time, the topic of immigration was brought up. Both men defended their views and past policies but Mr. Trump was hit hard when he defended his “zero tolerance” policy, which separated migrant parents from their children at the U.S.-Mexico border.

Mr. Trump was asked how he would reunite those families but he could not seem to come up with an answer, so he decided to dance around the question.

“We’re trying very hard, but a lot of these kids come up without the parents. They come over through cartels and the coyotes,” he said.

The President went on to say the only migrants who would obey the law “are the low IQ”, a comment that will not go over well in the coming days.

For his part, Mr. Biden said, he will propose legislation to find pathway to citizenship for the 11 million undocumented immigrants brought over by their parents or guardians at a young age as one of his first steps as president if he is elected.

“They’re going to be immediately certified again to stay in this country and put on a path to citizenship” rather than “sent home to a country they’ve never seen before,” Biden said. “Many of them are model citizens. Over 20,000 of them are first responders out there taking care of people during this crisis. We owe them.”

Biden’s plan for the oil industry

In the latter stages of the debate, the subject turned to climate change. Mr. Biden commented he would like to “transition from the oil industry”, leaving the Republican President to say it was a “big statement” and he would likely lose states like Texas, Oklahoma(?), and Pennsylvania.

While many at the Trump campaign and Republicans alike are saying this is a “gaffe” for the former Vice President, in reality, it is not. All you need to do is take a look at his website.

Biden has laid out a plan to eliminate the U.S. carbon footprint by 2050. To do this, moving away from producing oil over time is an obvious component of any plan that is effective in combating climate change.

“The oil industry pollutes significantly,” Biden said. “It has to be replaced by renewable energy over time. Over time.”

As you can probably imagine, health care was another big topic of this debate. Nearly 30 million Americans did not have health care in 2019 and another 12 million lost their employer-sponsored health insurance.

“What I would like to do is a much better healthcare, much better,” Trump said. “It will always protect people with pre-existing—so I’d like to terminate Obamacare, [and] come up with a brand new, beautiful health-care [plan].”

Meanwhile, when Mr. Biden was Vice President, he helped create the Affordable Care Act (ACA) aka Obamacare. Under his plan, Americans would have the option of purchasing public health insurance, which would then provide competition for private health insurance rates, with the hope it would drive down costs for everyone, without forcing anyone off their existing plans. 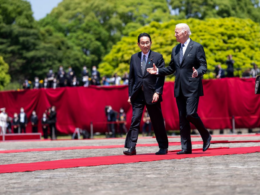 Trump will spend the final hours of his presidency at his Mar-a-Logo estate in Florida.
byStephen Michael