The city of Mayfield was one of the hardest hit after a roof collapse at a candle factory had resulted in mass casualties.

(Fwrd Axis) — Over 70 people are feared to be dead after a series of tornadoes ripped through Kentucky and other states early Saturday morning Kentucky Gov. Andy Beshear said.

Over 181 guardsmen from the National Guard were deployed to the state to help with the recovery efforts following the catastrophic damage that was left for over 200 miles after the tornado touched down.

“This is the most devastating, most deadly tornado event in Kentucky’s history,” Beshear said in a news conference Saturday. “We will make it through this. “We will rebuild, we are strong, resilient people.”

“The federal government is not going to walk away,” Biden added. “We’re going to get through this.”

In total, four tornadoes, one of which stayed on the ground for more than 200 miles, ripped through the state and left over 60,000 without power.

The city of Mayfield was one of the hardest hit after a roof collapse at a candle factory had resulted in mass casualties.

“The devastation is unlike anything I have ever seen in my life,” Beshar said. “It will be a miracle if anyone else is found alive.”

Republican Sens. Mitch McConnell and Rand Paul of Kentucky both put out statements about the news of mass deaths as a result of the tornado.

“As I continue to get reports from my staff, local and state officials, we will work with the entire Kentucky federal delegation to support Governor Andy Beshear’s requests for federal assistance in order to aid these hard-hit communities with the funding and resources they need to rebuild,” McConnell said.

Elsewhere, one person was dead and five were seriously injured after a tornado struck a nursing home in Arkansas. Tornado and severe storm warnings were declared for Arkansas, Illinois, Missouri, and Tennessee. Over 180,000 utility customers across those five states were left without power.

“We’re working with Governors to ensure they have what they need as the search for survivors and damage assessments continue,” the President tweeted on Saturday. “To lose a loved one in a storm like this is an unimaginable tragedy.”

55 million people were affected by power outages after a record 7.4 inches of rainfall in the Northeast.
byMiamii Mansour

Devastation ensued as New Orleans, Louisiana was caught in its most “catastrophic” storm on the 16th anniversary of Hurricane Katrina.…
byMiamii Mansour 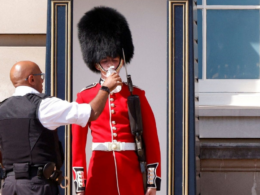 LONDON (Fwrd Axis) — The record heat is not just happening in the United States, overseas people are being told…
byStephen Michael