WASHINGTON (Fwrd Axis) — President Joe Biden on Monday stood by his comments that Russian President Vladimir Putin can’t remain in power, saying he had been expressing his “moral outrage” amid criticism of his remark both at home and abroad.

Speaking at the White House on Monday, Biden was asked several questions regarding his comments about Putin that raised concern over the ad-libbed line in a speech in Poland on Saturday.

“I’m not walking anything back,” Biden said. “The fact of the matter is, I was expressing the moral outrage I felt toward the way Putin is dealing and the actions of his man, which is just brutality.”

The President seemed to suggest he was pushing for regime change in Russia when he made the comment “For God’s sake, this man cannot remain in power,” he said, referring to Putin. The White House quickly released a statement to walk back Biden’s comment.

“The President’s point was that Putin cannot be allowed to exercise power over his neighbors or the region,” a White House official said. “He was not discussing Putin’s power in Russia, or regime change,” the statement said.

“I was expressing my outrage. He shouldn’t remain in power, just like bad people shouldn’t continue to do bad things. But it doesn’t mean we have a fundamental policy to do anything to take Putin down in any way,” Biden said Monday when asked by reporters what he meant.

However, world leaders, officials, and experts said Biden’s comments could play into the theory by Russia that the United States and the West are attempting to overthrow Putin. French President Emmanuel Macron told French television on Sunday that he “wouldn’t use this type of wording” when discussing Putin’s reign in Moscow.

Biden dismissed this notion, saying he didn’t believe that the comment would complicate or escalate the war in Ukraine or have any effect on Putin’s actions.

“He’s not affected by anybody else — including, unfortunately, apparently his own advisers,” Biden said of Putin. “He is a guy who goes to the beat of his own drum, and the idea that he is going to do something outrageous because I called him for what he was and what he’s doing, I think it’s just not rational.” 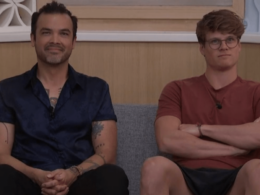 Julie informed the viewers that another twist is in store which will divide the house down the middle with two games of Big Brother being played simultaneously.
byStephen Michael

Diplomats to China, Japan, Israel, India and other European countries are expected to be in the first announcement.
byStephen Michael