Rock royalty Wolfgang Van Halen is the latest artist to stop through the KLOS studios to speak with New & Approved host Matt Pinfield.

As the song of the late Eddie Van Halen and nephew of Alex Van Halen, Wolf comes from a line of history, which he also helped create while learning from his late father and touring with the legendary Van Halen band.

With his debut album finally released, as the band Mammoth VHN, Wolf speaks with Pinfield on the long process it took to create the debut as he started writing and recording back in 2015. The album features self-production, which was a personal challenge for him to play all instruments.

Wolf talks about the tribute “Distance,” which is in honor of his father, and he also shares his favorite bands, reflects on touring with his family, the upcoming performance dates with Guns N’ Roses, and much more. 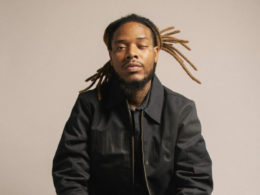 According to police, Fetty was arrested at Citi Field in Queens, where the Rolling Loud music festival was held on Thursday.
byRalph Okobz
Read More