The infamous Red Rocker himself, Sammy Hagar, stopped by the KLOS virtual series New & Approved to speak with Matt Pinfield on his extensive career and how he mended his relationship with the late Eddie Van Halen.

Hagar reflects on his humble beginnings of moving his family and early bandmates to San Francisco, on a whim, to kickstart his career after speaking with a physic in his hometown of Fontana.

After making the big unexpected jump, the rest was history as the famous Montrose singer has solidified his legacy in music history.

Speaking on his early work and relationship with Van Halen, Hagar shares his first experience recording with the band while they created songs like “Summer Nights”, and he also speaks on some regret he feels with the his previous book release which shared a bit of a negative light for both parties.

Prior to Eddie Van Halen’s 2020 passing, Sammy explains to Matt that the two were fortunately able to reconnect and mend their relationship thanks to the great comedian George Lopez.

Hagar goes on to speak about his love for performing cover songs, his admiration for his “BOA” Tina Turner, and much more. 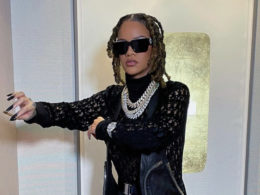 Pop Icon Rihanna Dressed Up As Gunna For Halloween

Music star and billionaire, Rihanna caused a stir on Sunday after uploading her Halloween photos on social media. Thank you…
byRalph Okobz