As COVID cases rise, El Paso has been hit hardest by second wave

AUSTIN, Texas – Texas has become the first state to hit the grim milestone of 1 million confirmed COVID-19 cases with coronavirus cases rising in all 50 states and hospitalizations now back on the rise.

The news comes as the border city of El Paso has been hit the hardest and added mobile morgues in anticipation of virus deaths overwhelming hospitals for weeks. The state has recorded more than 10,800 new cases on Tuesday, which set a new daily record and is the highest since July.

A spokeswoman for Republican Gov. Greg Abbott said he was relying on “data-driven hospitalization metrics” when discussing the possibility of shutting things down around the state again.

“The reality is, COVID-19 still exists in Texas and across the globe, and Texans should continue to take this virus seriously and do their part by social distancing, washing their hands, and wearing a mask,” Abbott spokeswoman Renae Eze said.

More than 18,800 people in the state have died from the coronavirus.

Tuesday saw the No. 5 ranked Texas A&M Aggies had its game this week against Tennessee rescheduled for Dec. 12 after Texas A&M reported at least three players or staff members tested positive for COVID. The University of Texas-El Paso also announced their Nov. 20 home game against Alabama-Birmingham would be moved to Midland, Texas.

In the Dallas area, cases hit 1,200 for a third consecutive day and in Lubbock, the cases have now spiked to 3,400 new cases last week. As of Wednesday afternoon, 6,779 patients were in Texas hospitals with the coronavirus, according to state data.

“Hospitals have been overwhelmed by sick patients pouring into ERs. And local officials there have had to bring in four mobile morgues to deal with deaths,” Texas Public Republic health reporter Bonnie Petrie told NPR on Tuesday. “But it’s not just an urban problem. Smaller towns and communities all across Texas are getting hit hard, too.” 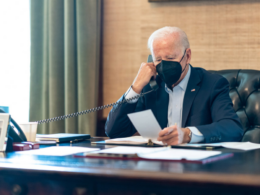