Back in the ’90s Tom Morello accomplished the remarkable feat of combining rock and rap together with his legendary band Rage Against The Machine.

Since then, Morello has continued his innovative work in music which has led to his latest solo project “The Atlas Underground.” Morello chatted with Matt Pinfield on “New & Approved” about the project’s new album “Fire” which features Bruce Springsteen, Chris Stapleton, Eddie Vedder, Phantogram, and numerous other iconic and upcoming artists.

Morello also dives into his past to discuss the pressures of censorship during his time with Rage Against The Machine. He also talks about growing up and playing music with Tool’s guitarist Adam Jones as teenagers and developing his passion for music through KISS, Black Sabbath, and AC/DC.

But the most important person in Morello’s life was his mother who still to this day is his biggest fan.

Morello has recently worked with many musicians throughout every genre including Metallica’s Kurt Hammond and Rush’s Alex Lifeson, and has gathered an impressive list of personnel for “Fire.” 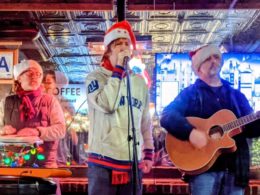 The first time I visited the West Village when I moved to NYC eight years ago, I fell in love…
byAngela Belcamino
Read More