The new law all but puts a stop to the procedure in the country’s second-largest state.

WASHINGTON — The Department of Justice has sued the state of Texas over a new abortion law that bans the procedure at six weeks, which is before most women realize they are pregnant.

The new law all but puts a stop to the procedure in the country’s second-largest state. Gov. Greg Abbott has said there are no exceptions for rape or incest but said the state will “eliminate rape” in the years to come.

“The act is clearly unconstitutional under long-standing Supreme Court precedent,” Attorney General Merrick Garland said Thursday afternoon. “Those precedents hold, in the words of Planned Parenthood v. Casey that ‘regardless of whether exceptions are made for particular circumstances, a state may not prohibit any woman from making the ultimate decision to terminate her pregnancy before viability.'”

The lawsuit was filed and said the Justice Department is seeking “a permanent injunction against the law from a federal court in the Western District of Texas” but it is unlikely the Supreme Court will get involved in the matter.

“Because this statute makes it too risky for an abortion clinic to stay open, abortion providers have ceased providing services,” Garland said. “This leaves women in Texas unable to exercise their constitutional rights and unable to obtain a judicial review at the very moment they need it.”

The Texas law is among the most strict in the nation, which will allow private citizens to sue anyone whose patients obtain abortions. As a result, several GOP states have announced they will make plans to enact the same law in their state.

“We urge you to take legal action up to and including the criminal prosecution of would-be vigilantes attempting to use the private right of action established by that blatantly unconstitutional law,” wrote House Judiciary Chairman Jerrold Nadler. 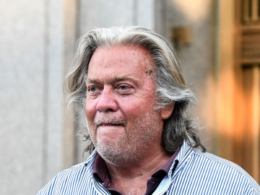 Bannon, who served as an adviser to former President Donald Trump, faces up to 2 years behind bars if convicted.
byStephen Michael

Trump's lawyers responded and argued their request was a sign the House could not prove its allegations the former President.
byStephen Michael
No comments

The House managers rested Thursday afternoon after three days of showing evidence and used Trump's own words against him.
byStephen Michael
No comments