Prior to the #TheShowMustBePaused announcement, Budrow’s song had already been set to be released on June 2nd 2020, the same day selected for the Music Industry Pause. When the movement was announced on June 1st just hours prior to the release date, Budrow made strong attempts to postpone his release.

Dark times are certainly upon us. Amidst a global pandemic, massive protests have broken out throughout the country in response to the tragic death of George Floyd, who’s life was unjustly taken by police brutality. The country is in chaos, with racism to blame.

It is times like these where we need to really look in the mirror and ask ourselves who we are. What do we stand for, where do our core values lie? Many citizens have come together to form peaceful gatherings, protesting racism and police brutality in support of equality, unity and justice. Others have resorted to violent acts of riots, destruction and looting.

Regardless of the actions taken, one message remains the same. Systematic racism needs to be addressed, and we need change now.

To support the cause, the music industry named June 2nd 2020 a day to pause. A day to stand with one another in a fight against systematic racism, coining the hashtag #TheShowMustBePaused to represent their efforts. Many artists and companies elected to step back from their normal lives and social media activity to support the movement.

Leon Budrow was no exception, as he postponed the celebration of his highly anticipated song release “Time of Our Life” to support the fight against racism.

Prior to the #TheShowMustBePaused announcement, Budrow’s song had already been set to be released on June 2nd 2020, the same day selected for the Music Industry Pause. When the movement was announced on June 1st just hours prior to the release date, Budrow made strong attempts to postpone his release. With too little time to fully make the adjustments, the song’s release date was not able to be completely changed for all platforms. The highly anticipated graduation anthem hit select stores at its original release date of midnight, June 2nd, 2020. It just didn’t feel right to celebrate the project on that day, Budrow explains. Even though the song was live and active, he honored the day by waiting until June 3rd to promote and share his work.

“I hoped the date could be changed, but on such little notice it was just too late to make it happen for all platforms.” Budrow explains. “So I paused – and waited for the next day to share it in honor of celebrating equality, unity and justice.”

Known for his positive outlook and charisma, Budrow was not shy to express his opinion on the matter, hopeful that better times are ahead.

“It is absolutely sickening what happened to George Floyd. These things cannot happen, they should never happen.” Budrow states.

At the same time, Budrow does not condone violent acts of riots, looting and destruction. “Destroying the city and hurting each other isn’t going to make it better.  It is devastating to see what has happened to our cities with mass theft and property damage.” Budrow states, as he personally knows Philadelphia business owners who have had their small businesses destroyed by the riots.

Budrow also expressed his sadness for the death of retired St. Louis Police Captain David Dorn, who was shot and killed during the riots. “My thoughts and prayers go out to the family of David Dorn. I certainly hope the looters who committed this murder are found and held just as accountable for this death as the officers who took the life of George Floyd should be.” Budrow states. “It’s just not right.”

With so much violence happening in our country, no matter the skin color, Budrow asks that we stop hurting each other and our communities and begin focusing on working together for a better future.

“I truly believe if we come together as one, and move forward with understanding and compassion for one another, listening and learning, we can create positive change.”

Hopeful that others will agree with his statements, Leon encourages others to be the change they want to see, and makes his stance very clear that we need to love and respect one another as equals, and that George Floyd deserves justice.

“We are all different but we are all human. Unity is our most powerful statement. I stand against racism. I stand with good cops. I stand for equality, unity and justice. I truly hope we can all come together to make the world a better place.”

For more information on how you can help support the cause visit http://blacklivesmatter.com

The legendary and widely known originator of Shock Rock, Alice Cooper, stopped through to chat with Matt Pinfield for the…
byMatt Pinfield 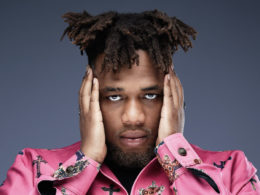 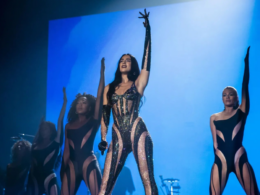