In judge Cooper’s order, he stated that George Zimmerman had failed to show “any fraudulent representation” in his suit and saw no need to move forward. This baseless lawsuit also named civil rights attorney Ben Crump as a defendant.

“There can be no claim for conspiracy to defraud if there is no adequately stated claim for fraud,” the order read, according to The Associated Press.

Trayvon Martin was visiting someone with his father the day he was racially profiled and murdered. His only crime was walking to a local convenience store to buy snacks while Black. George Zimmerman said he was pursuing the teen as part of a neighborhood watch program. Martin was unarmed when Zimmerman started the altercation that led to the shooting death of the 17-year-old.

Zimmerman claimed self-defense under Florida’s “Stand Your Ground” law and was acquitted of all charges connected to Trayvon’s murder in 2013. The acquittal in his case is responsible for the international hashtag, #BlackLivesMatter, and started the highly familiar Black-centered social and political movement.

“It was like trying to pour salt into the wound,” said the father of Trayvon Martin.

The lawsuit, filed by George Zimmerman in late 2019, stated that Rachel Jeantel, a witness in his 2013 trial, falsified her claims so she could testify instead of her half-sister, Brittany Diamond Eugene. Zimmerman also tried to say that a book written by the parent’s of Trayvon Martin, titled Rest In Power: The Enduring Life of Trayvon Martin, portrayed him as a racist murderer ─ which is accurate, if you ask me, because that’s what he is.

Giuliani played a key role in vocalizing the falsehoods about the 2020 election and played a part in Trump's attempts to overturn the election results.
byStephen Michael 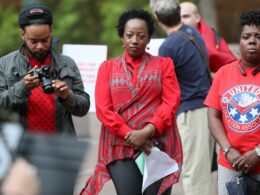