The judges are deadlocked once again in the second live results show of the season.

America’s Got Talent continued on Wednesday night with the results of America’s vote as seven more acts advanced into the semifinals of this year’s competition.

After Tuesday’s live show saw several acts underperform, which acts would the viewers put into the next round? Things were about to get really tense.

Host Terry Crews started things off by revealing the acts were in danger of going home. He announced Korean Soul, T.3, and Tory Vagasy needed the viewer’s help in the live vote to save.

After a performance from Season 11 runners-up, The Clairvoyants, Terry returned with more results. He revealed both Victory Brinker and Aidan Bryan had made it into the next round along with mentalist Peter Antoniou.

Terry then called Dokteuk Crew, Josh Blue, and Johnny Showcase for the final result before the instant save. He revealed comedian Josh Blue had advanced into the next round and judge Simon Cowell made a bold prediction.

“There is a chance you could win this whole thing,” he said.

Before the final result of the night, H.E.R. took to the stage to perform with Season 14 winner Kodi Lee.

Terry returned for the final result of the night and this time it was up to the judges to decide between T.3 and Korean Soul. Heidi and Sofia chose T.3 while Howie and Simon picked Korean Soul. That left it up to America’s votes last night and Terry announced Korean Soul edged out T.3 to advance.

America’s Got Talent continues next Tuesday and Wednesday on NBC at 8/7c. 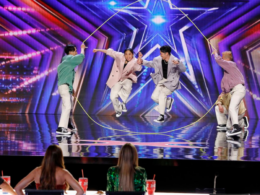