Breyer informed the White House last week of his decision to step down from the court but did not speak with the President directly.

Speaking from the White House, Biden thanked Breyer for his “remarkable” service. Breyer informed the White House last week of his decision to step down from the court but did not speak with the President directly.

“I’ve made no decision except one – the person I will nominate will be someone with extraordinary qualifications, character, experience, and integrity, and that person will be the first Black woman ever nominated to the United States Supreme Court. It’s long overdue in my view,” Biden said.

The announcement formally kicks off what’s expected to be a months-long back and forth in Washington and the White House begins the vetting process.

Biden, who has been struggling in the polls for months, will likely use the vacant spot on the Supreme Court to motivate the Democratic base as well as divert attention from his agenda that has struggled to pass through the Senate.

Breyer spoke at Thursday’s event with Biden, talking about the importance of a diverse nation during a time when it is so bitterly divided.

Breyer is of three remaining liberal justices and if confirmed, Biden’s nomination would allow the court to remain 6-3 in favor of the conservatives.

Ketanji Brown Jackson seems to be the most likely to be picked by Biden to fill the vacant seat. Last year, he elevated her to the U.S. Circuit Court of Appeals for the District of Columbia, the highest and one of the most important federal panels. She was confirmed by the Senate in mid-June on a 53-44 vote.

Democrats have been pushing for Biden to keep his word to nominate a Black woman ahead of Biden’s remarks Thursday. “The court should reflect the diversity of our country, and it is unacceptable that we have never in our nation’s history had a Black woman sit on the Supreme Court of the United States — I want to change that,” said Sen. Patty Murray (D-Wash.) in a statement on Wednesday.

“I will listen carefully to all the advice I’m given, and I’ll study the records and former cases carefully, I’ll meet with the potential nominees, and it’s my intention, my intention to announce my decision before the end of February. I have made no choice at this point,” Biden said. “Once I select a nominee, I’ll ask the Senate to move promptly on my choice.”

White House press secretary Jen Psaki said Thursday that Biden intends to name the nominee by the end of February but added: “it’s not a set deadline”. She also said the President has been looking at nominees to place on the court since last year. 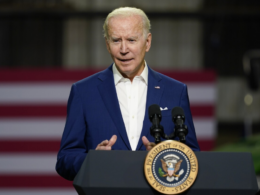 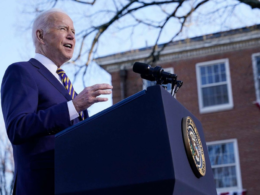 Biden along with Vice President Kamala Harris spoke on the importance of getting these bills passed and signed into law.
byStephen Michael
No comments 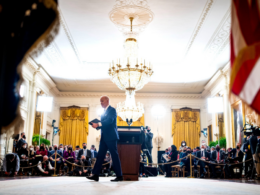