‘Everything Everywhere All at Once’ is extremely insane, and I mean that in a good way.

(Fwrd Axis) — Going into the theater, I didn’t know what to expect for Everything Everywhere All at Once. I ended up walking out of the theater after witnessing one of my favorite movies in years. A movie that is hard to properly, yet an enjoyable ride of thrilling, humorous, emotional, moving, and creative storytelling. This nonstop ride is some of the most fun I’ve had in theaters; a movie that I would consider a theatrical event.

Everything Everywhere All at Once is extremely insane, and I mean that in a good way. What seems like a straightforward drama at first turns on a dime in an instant as you’re plunged with the hero of this story, Evelyn, into a multiversal ride. A ride that takes you to a countless amount of worlds where different events, skills, and even personalities live as we just through hundreds with Evelyn. Each world is familiar but different in big and small ways, including some very absurd ones.

The movie jumps between these worlds, becoming a thrilling action movie that doesn’t want to stop. Giving us exposition, and brilliant action scenes as this movie set up the remaining acts. This thrilling first act lets directors Daniel Kwan and Daniel Schinert (usually referred to as the Daniels) have fun and unleash some extremely creative action scenes. Scenes that let Michelle Yeoh show off her amazing talents as well (not the only talents she shows off in this movie) as Evelyn.

These insane action scenes also show off a long-forgotten star, Ke Huy Quan, better known as Short Round from Indiana Jones and the Temple of Doom and Data from The Goonies. An actor that had nearly a 20-year gap between doing movies as an actor. This movie is Quan’s second in his second stint as an actor and he doesn’t disappoint as Raymond. With a stunt choreographer background, his first action scenes are one of the most impressive in the whole movie. Action aside, Quan’s character plays a significant role in the movie and it’s brilliantly performed by the 50-year old Vietnamese actor.

Back to Yeoh who already had brilliant performances in the past shows off why she is one of the best in her craft. The range put on display by her within the span of the two-plus-hour movie is a rarity, especially at the level performed by her. From comedy to drama to action, Yeoh’s range and ability are absolutely brilliant and certainly award-worthy.

It needs to be mentioned how beautiful and stunning this movie is visually despite a modest $25 million budget. In an interview with WIRED, visual effects artist Zak Stoltz said that the movie had over 500 visual effect shots but was only done by five artists. For a movie over two hours and as visually breathtaking & creative as Everything Everywhere All at Once, this is a brilliant feat by the visual effects team. Effects that have us seeing multiple Evelyns in a multitude of worlds, costumes, and actions done by guys simply using After Effects and simple editing techniques. An indie film with a big-budget feel.

The story of Everything Everywhere All at Once is one that will take you on an extremely fun journey. One that starts with action, transitions to an emotional journey that ends with a heart-warming, feel-good ending that brings your experience to what I describe as a positive retrospective on life and relationships. One that puts a smile on your face and feeling those positive vibes everyone seeks. While Everything Everywhere All at Once is a bit long with some odd pacing, it is the one flaw in a nearly flawless movie that so far has my pick as my favorite movie in 2022.

Everything Everywhere All at Once is now in theaters. 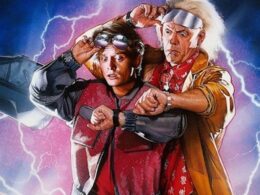 NEW YORK, NY (Fwrd Axis) – Roads? Where we’re going we don’t need…roads. But you will need a ticket if…
byTy Jager