Democrats are quietly raising concerns over the President’s intentions to run for a second term.

(Fwrd Axis) — With sagging approval ratings and his agenda stalled, President Joe Biden is losing popularity with voters and reportedly members of his own party, with Democrats quietly raising concerns over Biden running for reelection in 2024.

According to an article from the New York Times published Saturday, Democrats are quietly raising concerns over the President’s intentions to run for a second term and are becoming less inclined to support Biden for a run in 2024.

Joe Biden’s approval ratings have hovered around the low 40s since last August and his agenda has stalled in Congress on key issues he ran on including both voting rights and gun reform legislation. That combined with his age has led to a lack of voter enthusiasm heading into the 2022 midterms, according to the newspaper.

“To say our country was on the right track would flagrantly depart from reality,” said Miami Democratic National Committee member Steve Simeonidis. “The President should announce his intent not to seek re-election in ’24 right after the midterms.”

The Times spoke with 50 Democratic officials at both the local level and members of Congress, assessing the President’s standing among voters. Those Democrats criticized Biden for not using the bully pulpit of his office, which led to him suffering in the polls.

With Republicans currently projected to win one or both houses of Congress in November, questions are being raised about Biden’s ability to lead a polarized country that is facing several crises at once.

These crises are not in Biden’s control, leaving Democrats answering several questions about inflation, surging gas prices, and a series of mass shootings. Party leaders told The Times the crises happening at once has left the administration frustrated.

Biden told ABC News last year that he plans to run for reelection in 2024 if he remained “in good health” and the White House has repeatedly said the President has “every intention” of running for reelection.

The President’s age is one of the main factors why Democrats are concerned. He is already the oldest serving commander in-chief at 79 years old and would be 82 by the time the winner of the 2024 election is inaugurated. Biden is known for his series of gaffes, which has left aides constantly correcting him on more than one occasion or clarifying remarks he had made previously.

“The presidency is a monstrously taxing job and the stark reality is the president would be closer to 90 than 80 at the end of a second term, and that would be a major issue,” David Axelrod, CNN political commentator and the chief strategist for Barack Obama told the paper.

However, Axelrod also added Joe Biden isn’t getting enough credit from voters or the media for turning the country around.

“Biden doesn’t get the credit he deserves for steering the country through the worst of the pandemic, passing historic legislation, pulling the NATO alliance together against Russian aggression and restoring decency and decorum to the White House,” he said. “And part of the reason he doesn’t is performative. He looks his age and isn’t as agile in front of a camera as he once was, and this has fed a narrative about competence that isn’t rooted in reality.”

The news comes amid the House select committee investigating the January 6 attack on the U.S. Capitol beginning public hearings with Democrats hoping to use it as a midterm message to remind voters what, in their eyes, the GOP represents: standing with Trump, who looks to be at the center of an effort to overthrow democracy.

Democrats are likely in their final chance to hold Donald Trump and his allies accountable before the midterms. Republicans have promised to shut down the committee and begin their own investigations against Biden and his son, Hunter, if they win the House in November.

Despite Joe Biden claiming he intends to run for reelection, Democrats are unsure of who will lead the party into the future. Vice President Kamala Harris would be the top choice if she decides to run, but she’s also had a series of political missteps as well.

Other names that have been rumored to mulling a run should Biden decline to seek a second term include Senators Amy Klobuchar of Minnesota and Cory Booker of New Jersey, and Transportation Secretary Pete Buttigieg. Bernie Sanders is reportedly considering a third run for president his former campaign adviser said but only if Biden doesn’t run.

Cristóbal Alex, a senior adviser for the Biden campaign, said he believes the President is the only Democrat who can defeat Trump if he decides to run or Ron DeSantis.

“I am worried that leaders in the party aren’t more aggressively touting the success of the administration,” he said. “The narrative needs to shift, and that can only happen with a powerful echo chamber.”

The Biden family got Champ as a puppy in 2018 just before they moved into the vice president's official residence at the Naval Observatory.
byStephen Michael 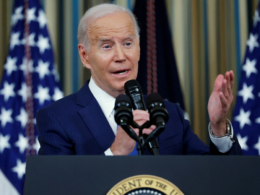 The appearance signals a move from the White House to remain bipartisan amid the new Republican-led House of Representatives taking control on Tuesday.
byStephen Michael