MIAMI — Over 100 people are missing, at least one person is dead and 10 are injured after a condo building partially collapsed near Miami Beach early Thursday morning.

Raide Jadallah, the assistant chief of operations for Miami-Dade Fire Rescue, said the building had 136 units, 55 in the corridor collapsed but gave no reason for the building giving away.

As of Thursday afternoon, there are 99 people unaccounted for and 10 left hurt.

“It is a very slow and methodical process because every time we start breaching parts of the structure, we get debris that falls on us,” said Jadallah.

Florida Gov. Ron DeSantis visited the collapse on Thursday. He said the Red Cross was setting up displaced residents in hotels but gave no answer when asked what caused the building to collapse.

“The TV doesn’t do it justice,” he said. “It is really, really dramatic to see the collapse of a major structure like that.”

Surfside Commissioner Eliana Salzhauer said it will take time for the search-and-rescue operations to complete their sweep of the rubble, suggesting it could “play out for days.”

“I mean, could be weeks until we really know who is under the rubble, who survived, who didn’t survive,” Salzhauer said. “There’s a lot of people unaccounted for, lot of families very concerned.”

“We have gotten in touch with FEMA and they are ready to go,” Biden said. “We are ready to move federal resources immediately.” He said the administration was waiting for DeSantis to ask for help or declare an emergency.”

“I say to the people of Florida, whatever help you want the federal government to provide, we are waiting. Just ask us and we will be there,” Biden added.

DeSantis declared a state of emergency through an executive order late Thursday. 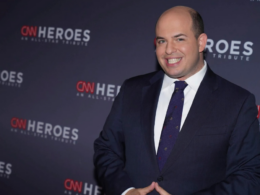 Brian Stelter To Leave CNN As ‘Reliable Sources’ Is Canceled

Stelter has hosted the show for the past nine years and its final show will air on Sunday, the network said.
byStephen Michael