Government To Ship Covid Vaccines To Pharmacies Next Week

The shipment of 1 million doses will go to 6,500 stores across the country beginning on Feb. 11.

WASHINGTON — The federal government will ship doses of the Covid-19 vaccine to  retail pharmacies next week, as the Biden administration makes good on its promise on how and where Americans can get the shot.

The shipment of 1 million doses will go to 6,500 stores starting Feb. 11, according to Covid-19 coordinator Jeffrey Zients.

The states were left to fend on their own after the Trump administration sent them doses of the vaccine. Some decided to use retail pharmacies help administer the vaccine to groups like elderly and health care workers.

Pharmacies will still need to follow their state’s guidelines to determine who will receive the shots. Americans can make an appointment on their local pharmacy’s website if they feel they fall into the certain risk groups.

“The initial phase of activating local pharmacies will get more shots in arms,” Zients said. “It will ensure that pharmacies have the infrastructure and the experience they need to scale up when vaccine supply increases in the months ahead.”

CVS will receive 250,000 of those doses from the federal government next week, including 100 in California and 70 in Texas. CVS has 10,000 stores nationwide.

President Joe Biden has previously said his goal is to administer 100 million doses of the shot by his first 100 days in office while later adding it could be as high as 150 million. There has been concern that the severe weather across much of the northeastern part of the country has affected the vaccination process.

As of this writing, 32 million Americans have been given the COVID-19 vaccine, just seven percent of the overall population. More than 100,000 people have died from Covid-19 in the United States so far in 2021, bringing the overall total to over 400,000 Americans.

A critical care nurse was the first person in New York and among the first in the country to get a shot.
byStephen Michael 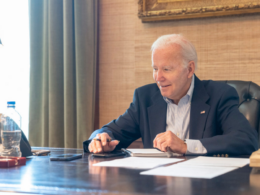