The creature in the mines is straight out of the DC Comics pages — with a twist!

(Fwrd Axis) – Superman and Lois continued on Tuesday night with Clark’s visions getting worse, Jordan making a decision about his relationship, and the creature in the mines finally breaking out.

The episode kicked off with Lana’s campaign for mayor of Smallville getting off to a stressful start. She’s worried she might not have the edge (and no, thanks not a Morgan Edge pun). But her family is confident she can win over the town to support her and win.

Meanwhile, the Kent family saw a different side to Clark after Jordan told him he wants to tell Sarah the truth about him having powers and Clark being Superman. Clark freaked out, saying he didn’t tell Lois until after he married her. He raised his voice at Jordan, causing his eyes to glow red, freaking out his family in the process.

At school, the tension is awkward between Sarah and Jordan. Sarah tells him the kiss at camp meant nothing, that she loves him. Jordan says he doesn’t know to move forward with this information. At football practice, Jonathan is feeling upset that he’s not getting playing time at practice, resulting in a fight between him and a drug-taking student stealing his spot when he’s told Jon’s girlfriend, Candace, is selling the drugs. Jon hits Clark, who pulls him into an empty room to scold him – but he goes red again and loses control.

After a conversation with Clark, Jordan realizes he can keep his secret from Sarah. He shows up at the Cushing house with a gift for her, a necklace that belonged to his grandmother. They end up staying together but something tells me she’ll find out his big secret by the end of the season.

John Henry Irons gets some help from Sam to access the mines and when he’s down there, he notices blood. He is attacked by the woman overseeing the mines and she is later seen on the phone telling someone ‘it’ is coming out today because the timeline has been moved up.

Superman experiences another headache and vision and this time back at the mines a creature escaped. The military couldn’t stop Doomsday and when Superman arrived, their strengths matched each other. John blasted him with his suit and tore off a bit of the mask, revealing what looked like an evil Superman from another world aka Bizarro, shocking Clark.

Elsewhere in the episode, Lois sets up a meeting with her sister, Lucy, but is blindsided by the cult leader she helped expose. Plus Natalie agrees to help John Henry in the fight against Bizarro.

Superman and Lois airs Tuesdays at 8/7c on The CW.

We can deconstruct "Bridgerton" into three brackets, from the way women are viewed and treated to the way men make decisions for women.
bySumaiya Ahmed 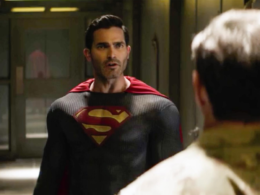 One of the most iconic Superman villains has arrived in Smallville in the Season 2 premiere of Superman & Lois.
byStephen Michael