“We don’t know exactly what is going to happen, but the risk is now high enough and the threat is now immediate enough,” Sullivan said.

WASHINGTON (Fwrd Axis) — The Biden administration believes there is a “distinct possibility” Russia could invade Ukraine before the end of the 2022 Winter Olympics on February 20 but added they do not think Russian President Vladimir Putin has made a final decision yet on how to move forward.

White House national security adviser Jake Sullivan spoke to reporters at the daily press briefing on Friday and said the threat of a Russian invasion is “now immediate enough” to warn Americans in Ukraine to evacuate within the next 24 to 48 hours.

“We don’t know exactly what is going to happen, but the risk is now high enough and the threat is now immediate enough,” Sullivan said.

“We continue to see signs of Russian escalation, including new forces arriving at the Ukrainian border. As we’ve said before, we are in the window when an invasion could begin at any time should Vladimir Putin decide to order it,” he said.

"The president will not be putting the lives of our men and women in uniform at risk by sending them into a war zone to rescue people who could have left now but chose not to, so we are asking people to make the responsible choice" — Jake Sullivan pic.twitter.com/dW8WdvrJ9c

“I will not comment on the details of our intelligence information, but I do want to be clear, it could begin during the Olympics, despite a lot of speculation that it would only happen after the Olympics,” he added.

President Joe Biden warned Americans to leave Ukraine now in an interview with NBC News taped Thursday, which will air during Sunday’s Super Bowl. He added sending troops into the country to rescue U.S. citizens would result in “world war.”

On Friday, Sullivan issued a stark warning to Americans in Ukraine to leave the country within the next 48 hours and if they decide to stay, the United States will not be able to rescue them. He stressed that U.S. intelligence officials do not believe Putin has made a final decision but added there is a “sufficient level of concern based on what we are seeing on the ground, and what our intelligence analysts have picked up that we are sending this clear message.”

Reports pressed Sullivan about how an attack would unfold after inaccurate reporting Putin had decided to invade the country.

“It is clear to us that there is a very distinct possibility that Russia will choose to act militarily and there is reason to believe that could happen on a reasonably swift timeframe,” Sullivan said. “Now, we can’t pinpoint the day at this point, and we can’t pinpoint the hour, but what we can say is that there is a credible prospect that a Russian military action would take place, even before the end of the Olympics.”

Sullivan described the invasion beginning with aerial bombing and missile attacks that “could obviously kill civilians without regard to their nationality.”

Biden participated in a virtual meeting with U.S. allies, including the leaders of Canada, France, Germany, Italy, the United Kingdom, Poland, and Romania.

“The leaders agreed on the importance of coordinated efforts to deter further Russian aggression against Ukraine, including their readiness to impose massive consequences and severe economic costs on Russia should it choose military escalation, and to continue reinforcing the defensive posture on NATO’s eastern flank,” the White Hous said in a statement.

White House Press Secretary Jen Psaki said Friday even though Biden is leaving to Camp David for the weekend, he will still be in contact with his National Security Team.

“The President fully equipped to have engagements of all sorts including with his national security team and European counterparts,” she said. 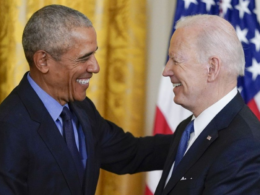 Biden will commit Tuesday to using every tool at his disposal to protect Americans against voter suppression laws.
byStephen Michael