Two dozen Democratic senators, led by Elizabeth Warren, sent President Biden a letter to issue an executive order to plan out some form of protection for abortion services.

Vice President Kamala Harris spoke to CNN’s Dana Bash for an interview and said that is not something the administration is considering currently.

“I think that what is most important right now is that we ensure that the restrictions that the states are trying to put up that would prohibit a woman from exercising what we still maintain is her right, that we do everything we can to empower women to not only seek but to receive the care where it is available,” Harris said.

Dashed pressed the Vice President again: “Is federal land one of those options?”

“It’s not right now what we are discussing,” Harris answered.

Harris said she was “shocked” when she learned of the Supreme Court’s decision to overturn Roe v. Wade, ending 50 years of federal abortion protections.

“It’s one thing when you know something’s gonna happen. It’s another thing when it actually happens. And I just actually turned to CNN, and I couldn’t believe it,” Harris said.

Furthermore, a White House official confirmed to FWRD AXIS News while the Democratic proposal was “well-intentioned” it “could put women and providers at risk.”

“Importantly, in states where abortion is now illegal, women and providers who are not federal employees could potentially be prosecuted,” the official said.

Prior to Friday’s announcement over two dozen Democratic senators, led by Elizabeth Warren (D-Mass.), sent President Joe Biden a letter to issue an executive order to plan out some form of protections for abortion services where its possible.

Rep. Alexandria Ocasio-Cortez (D-N.Y.) spoke at a rally in New York’s Union Square, saying the White House needs to “be relentless to restore and guarantee all of our rights.”

Instead, Harris said the focus for Democrats moving forward should be voting in the midterm election this November, stressing the importance of the party keeping power.

“We are 130 odd days away from an election, which is going to include Senate races, right?” Harris said. “Part of the issue here is that the court has acted, now Congress needs to act. But if you count the votes, don’t appear to have the votes in the Senate.” 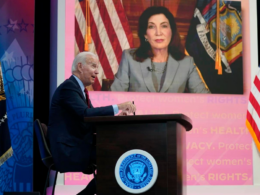 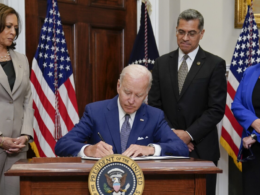 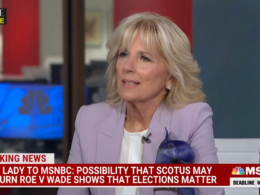 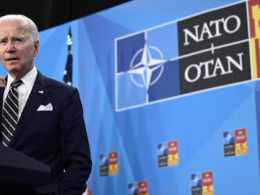