Speaking in German, Scholz echoed the President and said the U.S. and Germany agreed upon a set of responses, including sanctions.

WASHINGTON (Fwrd Axis) — The United States and Germany presented a united front against possible Russian military aggression in Ukraine at the White House on Monday with President Joe Biden and German Chancellor Olaf Scholz promising Russia would pay a ‘high price’ if they invade.

Holding a joint press conference following their meeting, both Biden and Scholz stressed unity against Russia as there are currently 100,000 Russian troops at the Ukraine border. Russia has denied any invasion is planned but U.S. officials say an attack could happen within days or weeks.

“There will be a very high price if Ukraine is attacked militarily,” Biden said. “And we are preparing for this very precisely and have been talking about the details for a long time.”

Speaking in German, Scholz echoed the President and said the U.S. and Germany agreed upon a set of responses, including sanctions.

“There will be a high price for Russia,” he said.

Biden made a noteworthy mention that the United States would “bring an end” to the Nord Stream 2 natural gas pipeline if Russia but did not go into detail about how that would happen.

“If Russia invades — that means tanks for troops crossing the border of Ukraine — then there will be no longer a Nord Stream 2. We will bring an end to it,” he said.

Scholz did not take as hard of a stance on Nord Stream 2 when pressed by reporters at the White House, saying Germany was “acting together” with its allies and promising “very, very harsh” steps against Russia if it invades.

Scholz has faced harsh criticism in Germany for not having an active role in addressing the ongoing conflict and tensions between Russia and Ukraine. The German leader has refused to specify what type of sanctions he would impose if Russia invaded and declined to send Ukraine arms, sending 5,000 helmets instead.

When pressed by a U.S. reporter about “pulling the plug” on Nord Stream, Scholz appeared to roll his eyes at the question and again did not give a concrete answer.

“As I said, we are acting together. We are absolutely united and we will not be taking different steps. We will do the same steps and they will be very, very hard to Russia and they should understand,” he said.

The President also cautioned Monday that Americans in Ukraine should leave the country unless they are government employees.

“I think it would be wise to leave the country,” Biden said. “I’d hate to see them get caught in a crossfire.”

Biden brushed off the notion that Germany could “win back trust” by publicly committing to end the Nord Stream project if Russia does invade. 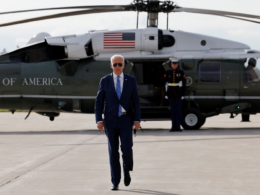 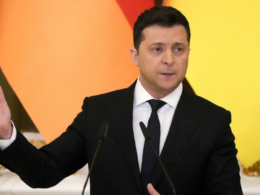 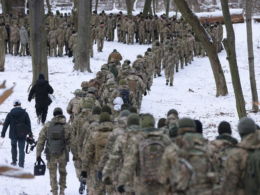 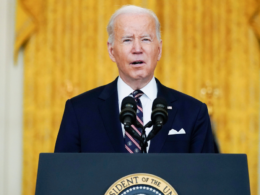