With the additional doses, the President says there would be enough to vaccinate 300 million Americans by the end of summer of early fall.

Mr. Biden’s administration announced the order of 200 million more doses of both vaccines. With these additional doses, the President says there would be enough to vaccinate 300 million Americans by the end of summer of early fall.

“We now have a national strategy to beat Covid-19. It’s comprehensive. It’s based on science, not politics. It’s based on truth, not denial, and it is detailed,” Biden said.

The United States will purchase 100 million doses of Pfizer/BioNTech and 100 million more from Moderna — the two vaccines that have been granted emergency use authorization by the US Food and Drug Administration.

“It will be enough to fully vaccinate 300 million Americans to beat the pandemic,” Biden said.

The news comes just 24 hours after Mr. Biden said he expects the country will be able to vaccine 1.5 million people per day, which is an increase from the administration’s previously stated target of 1 million per day.

Companies will not be able to deliver the new shots until sometime this summer, raising concerns of possible supply shortage that could stretch over the span of several months.

Mr. Biden spoke privately with state governors and mayors on Tuesday, according to White House Press Secretary Jen Psaki. According to reports, he told state leaders 5.7 million Moderna doses and 4.3 million Pfizer doses would be heading out next week.

The Biden administration is also planning to give states a three-week forecast of an estimates of how much vaccine they will receive. This comes after states complained they need more advance notice to plan out key factors such as vaccination sites to smaller clinics.

“This is going to help make sure governors, mayors & local leaders have greater certainty around supply so they can carry out their plans to vaccinate as many people as possible,” Biden said.

As of Tuesday afternoon, 22.7 million doses of Covid-19 vaccines have been administered to Americans, according to the Center for Disease Control and Prevention. 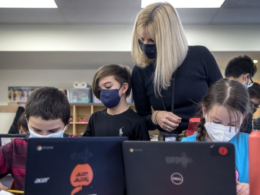 The White House said it will distribute 5 million tests per month while vowing to send an additional 5 million PCR tests available.
byStephen Michael