Biden met with the families for over three hours as well as meeting with local officials and first responders.

SURFSIDE, Fl. — President Joe Biden spent Thursday in Surfside, Florida, to grieve with family members of those affected by last week’s condo building collapse that has killed at least 18 people.

Biden met with the families for over three hours. The meeting was closed to the media but attendees posted about the meeting with the President on social media and had his words translated into Spanish.

“The hardest thing is not knowing,” Biden told the families. “I wish I could tell you that it’s all going to get better, but I can’t.”

The President was over 40 minutes late for remarks but later apologized to the media, saying he felt it was important that everyone who wanted to talk to him got the chance to do so.

“The whole nation is mourning with these families,” Biden said. “They are going through hell.”

Biden was speaking from personal experience, recounting the deaths of his wife, daughter, and son in a car crash in 1972 after he was elected to the U.S. Senate and his son, Beau, dying of a brain tumor in 2015.

“It used to drive me crazy when they’d say I know how you feel,” he said.  “And you know they meant well but you know they had no idea. None.”

“Be patient with one another,” he went on. “Hang on. Hold on. I don’t want you to feel like you’re being sucked into a black hole in your chest. There’s no way out. But there is.”

The condo collapse has 18 confirmed deaths as of this writing and 145 people are still unaccounted for. Officials announced overnight that search and rescue efforts had been put on hold over fears additional parts of the structure could fall.

Biden, who was joined by first lady Jill Biden in Florida, declined to speculate the reason for the disaster when asked by the media. The President is awaiting his team of federal scientists and engineers to give a full report on the damage and a conclusion on the reason for the structure failing.

The President said the families waiting to hear news about their loved ones were all “realists.”

“They know that the chances are, as each day goes by, diminished slightly. But at a minimum, at a minimum, they want to recover the bodies,” he said.

Biden said the family members asked “heart-wrenching questions” such as, “‘Will I be able to recover the body of my son or daughter, my husband, my cousin, my mom and dad?'” and “‘How can I have closure without being able to bury them if I don’t get the body?'”

“I sat with one woman who had just lost her — her husband and her little baby boy,” he said. “Didn’t know what to do. I sat with another family that lost almost an entire family, cousins, brothers, sisters. And to watch them and — they’re praying and pleading that, God, let there be a miracle. Let there be something happen for me that’s good.”

Prior to meeting first responders and the families, Biden met with local officials. He sat next to Florida’s Republican Gov. Ron DeSantis and immediately offered to cover the cost of the response effort.

“I think there’s more we can do, including, I think we have the power, and I’ll know shortly, to be able to pick up 100% of the cost to the county and the state,” Biden said.

While meeting with a group of first responders, Biden expressed understanding and gratitude.

Before departing Florida, Biden the first lady stopped at a makeshift memorial where families have placed flowers, signs, and candles near the site of the collapse. The President made a sign of the cross as his wife set down a bouquet of flowers. 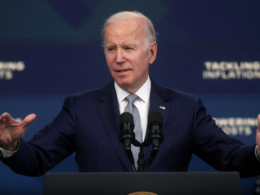 The final vote was 54 in favor and 35 against, making it the first bill to be filibustered by the Democratic controlled Senate.
byStephen Michael

Biden said his proposals would help better prepare the country for future natural disasters and the combat effects of climate change.
byStephen Michael

President-elect chooses long-time aide for one of the powerful positions in the White House.
byStephen Michael