0
2K
233
Home Voices Opinion | Harry And Meghan Have Gone, and Now The Monarchy Must Follow

Opinion | Harry And Meghan Have Gone, and Now The Monarchy Must Follow

Daniels: The Monarchy has no purpose in British life. It only highlights the existence of sheer inequalities in society

In the UK, we have this centuries-old institution called the Monarchy. Royalists, for which there are plenty in this country, tend to ardently defend the Monarchy at whatever cost, which has been a common occurrence in recent years.

The Monarchy was put under scrutiny in 2019 when Prince Andrew, son of Prince Philip and the Queen, was shown to have a close relationship with the convicted sex offender, Jeffrey Epstein. In the coming weeks, a photo even emerged of him with Epstein’s accuser Virginia Roberts and accomplice, Ghislaine Maxwell. Despite substantial evidence, Prince Andrew has never had any formal charges placed against him.

But this whole catastrophe failed to alter the public perception of the royal family. In a survey by YouGov taken in 2020, 63% of the total who participated said the UK should continue to have a Monarchy in the future.

Throughout 2020, the Royal family became wrapped up in the Harry and Meghan scandal, as the Duke and Duchess of Sussex announced their wishes to step down from the institution and pursue a life in the US, free of public responsibility. It was formally announced this year that the couple would step down and give up their royal titles and access to a salary (The Sovereign Grant) funded by the public.

And I say good on them, but the way they have gone about it has only inflamed them into the public eye even more – which was the very thing they wanted to escape from.

Prince Harry has always been slightly on the side-line of the Royal Family, but in an interview with Orpah Winfrey, expected to air in the UK on Sunday, he has said he doesn’t want “history repeating itself.” Of course, he is talking about the severe mistreatment of his mother, Princess Diana, who received consistent abuse by the media tabloids before her death in 1997. No member of the Royal family should ever have to deal with this treatment, as it is inhumane. However, we should be allowed to scrutinise the very institution they are apart of.

In agreeing to do an interview with one of America’s biggest talk show hosts, Oprah, they have opened an even bigger can of worms by inflaming British media attention and increasing speculation. They’ve already been in the headlines for a year since announcing their departure, combined with Meghan’s pregnancy announcement and the more recent news they will formally step away from public duties. Meghan and Harry have taken a robust stance against the outdated, intrusive and irrelevant institution. However, their methods have only created the media attention and intrigue they wanted to avoid.

Since the interview was announced, the British media have been obsessed with reporting every suspected detail. When the interview eventually airs in the UK, we Republicans will have to write off at least a week’s worth of watching the news, alas we’ll go mad. The sad thing is, if we didn’t have a royal family, this discussion wouldn’t even be needed.

Harry and Meghan’s actions are significant, and I think they are a step forward in the right direction for opening up the public discourse on the Monarchy’s purpose. However, it is not enough. They will remain in the headlines, taking up valuable news space for more pertinent issues, and their departure has done nothing to dismantle the institution itself.

At this point, you may be asking, what’s wrong with the Monarchy? Isn’t it an essential component of British life?

Several centuries ago, it used to be when we ceased to have an elected Prime Minister and Cabinet who governed the country. But now, the Queen is strictly impartial and plays no part in political life. The Monarchy has no shaping of our own individual lives but merely acts as a symbol for deep inequalities, unrestrained privilege and alternative standards.

The Epstein case with Prince Andrew is a prolific example. Despite the existence of concrete evidence of Prince Andrew’s association with Epstein, Virginia Roberts’ testimony, and being wanted by the US secret service, there have been no formal repercussions for his actions and associations with the serial sex offender. In fact, he’s taken a step back from public duties to avoid damaging the image of the Royal Family but refused to cooperate with US prosecutors.

Additionally, he’s been allowed to keep a £300,000-a-year allowance from the Queen for formal bodyguards. Any ordinary British citizen would have been subject to countless investigations and would probably be in prison by now – least of all they would not be allowed to exit from public life through the back door. The Royal family live by a set of different standards and are treated more leniently because of their preordained status. But this is not all.

The Monarchy has no purpose in British life. It only highlights the existence of sheer inequalities in society – and who pays for their luxuries? Working people. In 2019, £82.2 million of the Sovereign Grant was paid for by the British taxpayer, allowing members of the Royal family to travel, pay for the palace’s upkeep, and maintain the royal payroll. Whilst some people are struggling to get by, these privileged members of our society live in an extravagant palace, rent-free. Not only is it an outdated institution, but a symbol of privilege that does not concur with the rampant socio-economic inequality in Britain today. Imagine if these funds were used instead, to house the homeless, or end child poverty?

I applaud Harry and Meghan for their need to depart from this life. Still, they will remain privileged public figures who the press will follow every move of, from all sides of the Atlantic. Diana’s mistreatment was a diabolical move from the British, tabloid press and should not continue under Megan Markle.

However, the Royal family should still be scrutinised and not continue to live on a pedestal above everyone’s standards. I can only hope that this move by the Duke and Duchess of Sussex will mark a turning point in the British Monarchy’s eventual fall. But I fear this will take several decades to complete.

Why Young People Might Not Vote – But Still Should

Upon seeing my Facebook page mainly consisting of repetitive posts trying to coerce young people into voting, many slightly older… 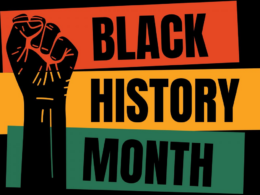 Black History Month is normally a time when we discuss Black contributions and achievements but this year is different. This…
byLance Cooper

The Roar Against Racism

A racial battle divides England in the fight for equality.
bySophia Mora

When it comes to discussing the voting habits of Asian-Americans, one must first acknowledge that Asian-American voters are difficult to…