The tests use a “mid-turbinate nasal swab”, which is less invasive than the current test being used to test Americans.

The Biden administration announced on Monday a $230 million deal with Australian company Ellume for production of the country’s first over-the-counter, at home COVID-19 test.

The Food and Drug Administration granted an emergency use authorization for the tests, which are expected to cost about $30 each, in December.

The Defense and Health and Human Services worth $230 million deal will allow “the scale for manufacturing base and capacity of this easy-to-use test,” Slavitt said. The tests will not require sending samples to a lab and is similar to at-home pregnancy tests.

The tests use a “mid-turbinate nasal swab”, which is less invasive than the current test being used to test Americans. The test a has users take the sample with a nasal swab and then place into a Bluetooth-connected analyzer that syncs with a smartphone app.

“After you take the swab, you put the sample into a digital analyzer, which will send a result to your smartphone in about 15 minutes,” Slavitt said.

The goal is to cover most Americans who may not know they are spreading the virus. If this testing is proven accurate at 95 percent, this could prevent the spread of the virus at a much faster rate.

In a press release, the company said its contract will help fund construction of Ellume’s first manufacturing plant in the U.S and will produce more than 500,000 tests per day, according to the company.

Ellume has committed to providing 8.5 million tests to the federal government. Currently, the U.S. average daily testing rate is at 550 per 100,000 people, according to John Hopkins University. This is a much small rate while the U.K. — which is a smaller country — tests 986 people per 100,000. 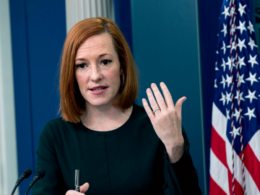 The grim milestone comes a year after the coronavirus outbreak was declared a pandemic.
byStephen Michael

Biden Doubles Down On Vaccination Efforts Amid Delta Variant Surge

Biden said that his administration is shifting its focus to a smaller, more community-based approach to try to reach those still not wanting to get the shot.
byStephen Michael