(Fwrd Axis) — Shanquella Robinson, a 25-year-old business owner from Charlotte, North Carolina, went on a vacation Oct. 28 to Cabo San Lucas, Mexico with six people who were supposed to be her friends. The following day, less than 24 hours later, she was dead.

This situation is extremely disturbing and sad because Shanquella’s mother received conflicting stories from the friends who were there with Shanquella, about what led to her death.

There’s also a video that surfaced showing Shanquella Robinson in a physical altercation with a woman who was later identified as one of the people Ms. Robinson was vacationing with.

RELATED: Shanquella Robinson’s Death In Cabo, Father Believes Attack Was A Set Up
In the sickening video, a nude Robinson can be seen taking several blows to the face and head, while a voice in the background encourages her to “fight back.”
The death certificate and autopsy report for Shanquella, says her cause of death was “a broken neck and a cracked spine” and didn’t say anything about alcohol.
The report also reveals the approximate time between injury and death was 15 minutes, while a box asking if the death was “accidental or violent” was marked “yes.”

“By the grace of God, I think I am going to get to the bottom of this. God ain’t gonna fail. It’s going to come out.” -Robinson’s father, Bernard Robinson

Pressure from the internet, and the viral fight video originally posted by blogger Gerald Jackson in North Carolina, definitely played a huge role in giving Shanquella’s voice the last say, because the FBI Charlotte Field Office has opened an investigation into Robinson’s death.
No charges have been announced yet and the names of Robinson’s friends haven’t been released.
Shanquella’s funeral services took place today, Nov. 19, in Charlotte.
Quilla Long, the sister of Shanquella Robinson, organized a GoFundMe to help with legal fees and other critical expenses associated with this devastating loss.
RELATED: Kyrie Irving donates $65K to assist Shanquella Robinson’s family’s legal and funeral expenses

“It’s like a nightmare. I can’t even sleep. I just want some truth because this doesn’t add up.” -Robinson’s father, Bernard Robinson

The Biden family got Champ as a puppy in 2018 just before they moved into the vice president's official residence at the Naval Observatory.
byStephen Michael 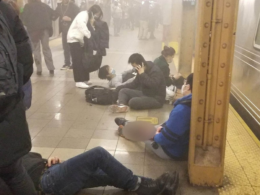