0
2K
234
Home TV ‘Batwoman’ Recap: The Fight To Save Mary’s Soul Gets Twisted In Vines

OG Poison Ivy has her powers back and that’s bad news for everyone in Gotham City.

(Fwrd Axis) – This week’s Batwoman saw the Bat team fight to save Mary’s soul from being taken over by OG Poison Ivy but the doctor-turned villain wanted to meet OG Ivy for saving her, further distancing herself from the life she once knew.

The episode kicks off with two men catching fish in the lake but are killed by vines coming up from the water. Pamela emerges very weakly and not even the sunlight can help her get back to full strength. Renee, who desperately wants OG Ivy back in her life says Mary can provide her the main source of getting her strength back.

Meanwhile, Ryan is giving Sophie the cold shoulder for much of the episode and it all leads to them along with Luke heading to the woods to stop OG Ivy and save Mary. While on the way there, Sophie and Ryan are fighting to hide their feelings but Luke steps in to stop Sophie from hitting an injured man.

While in a cave, Renee admits she wants her and OG Ivy to start over. Pamala concedes before using pheromone control to tell her lover that the only way they both can be together is for her to kill Batwoman. With Alice and Mary on the run, OG Ivy manages to connect with Mary, giving her a pounding headache to draw her back to her. It works as Mary and Alice head to the woods but Renee knocks Mary out, afraid of what will happen if the two meet.

Back in the cabin, Sophie demands to know what Ryan’s problem is with her. Ryan makes up some excuse as Sophie gets pulled by OG Ivy’s vines. Luke reminds both women that their talking (more like bickering) isn’t doing anyone any good. Ryan agrees to go outside and get some weapons but Ivy’s vines attack, nearly killing her. Sophie and Ryan share a kiss and their romantic journey has officially begun.

With Renee and OG Ivy talking, Pam thinks she isn’t loved because Renee won’t accept her for who she is. As they talk, Mary shows up despite Renee knocking her out. Ivy and Mary meet as the OG touches her face, gaining all her powers back. And that, my friends, is bad news for everyone in Gotham.

Elsewhere in the episode, John Diggle returned to Gotham and assisted Jada Jet in getting a cure for Marcus from becoming the next version of The Joker. However, his real reason for visiting was trying to get Luke’s help to open the box containing what everyone thinks is a Green Lantern ring. Luke can’t open it but suggests it’s something else entirely that can..

Batwoman airs Wednesdays at 9/8c on The CW. 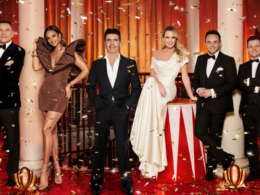