Biden said this is in the best interest of the U.S. and that he would not expect anything from other nations in return.

CORNWALL, U.K. — President Joe Biden announced Thursday that the United States will purchase and donate half a billion doses of Pfizer’s vaccines worldwide to countries struggling to meet supply.

Speaking from Cornwall, England, Biden said this is in the best interest of the U.S. and that he would not expect anything from other nations in return.

“From the beginning of my presidency we’ve been clear eyed that we need to attack this virus globally,” Biden said. We value the inherent dignity of all people. In times of trouble, Americans reach out to offer a helping hand.”

Biden said the donation of vaccines to other countries would “lay the groundwork” for other countries to share vaccines globally and hinted the other leaders at the G-7 Summit would announce their support of “the full scope of our commitment” to address the pandemic.

The news comes amid reports vaccination supply is outpacing demand in the United States. As of this writing, 64 percent of adult Americans now having received at least one shot, six percent shy of the President’s goal of 70 percent with one dose by July 4.

Biden has been facing pressure to do more to help other countries but there are some concerns that China and Russia could sell or donate their vaccines to other countries to expand their influence throughout the world.

In a stark contrast from his predecessor, Biden said the U.S. is going to provide the vaccines to other countries “with no strings attached”, saying “vaccine donations don’t include pressure for favors or potential concessions. We’re doing this to save lives, to end this pandemic. That’s it.”

The 500 million doses will be delivered using COVAX, a program run in part by the World Health Organization that overseas the distribution of vaccines fairly, and will be given to 92 low-income countries and the African Union.

The vaccines will begin going out in August with 200 million being delivered by the end of this year. The remaining 300 million will be delivered in the first half of 2022. Pfizer vaccine requires two doses, which means the U.S. will be able to fully vaccine 250 million of its total population of 328 million.

The President said that donating the vaccines to other nations was in “America’s self-interest.”

“As long as the virus rages elsewhere, there’s a risk of new mutations that could threaten our people,” Biden said.

British Prime Minister Boris Johnson spoke to the media following his meeting with Biden and said Britain would donate “millions” of doses, but did not say when. 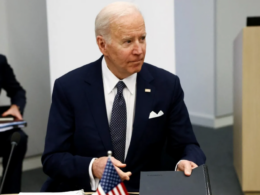 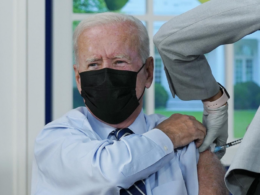