“I’ll have an answer on that in the next couple of weeks,” Biden said.

“I am considering dealing with some debt reduction,” he told reporters following remarks at the White House. “I am not considering $50,000 debt reduction [per borrower],” he noted, “but I’m in the process of taking a hard look at whether or not there are there will be additional debt forgiveness.”

“I’ll have an answer on that in the next couple of weeks,” Biden said.

The remarks came when reporters asked the Biden questions following his remarks on asking Congress for $33 billion in additional funding to Ukraine. The President has been under increased pressure from both Democratic lawmakers and young voters to forgive some student debt in the wake of the coronavirus pandemic over the past two years.

As of 2021, college students owe a massive $1.73 trillion in student loans. 43.4 million Americans are currently in debt following college with outstanding federal student loans as of the first quarter of 2021, according to the U.S. Department of Education. Analysis by the Federal Reserve found that $10,000 in debt forgiveness would help eliminate debt for 11.8 million Americans.

Biden has supported canceling $10,000 in debt per person going back to his days on the campaign trail but reports suggest the President has told his administration to explore if they could go even further. However, it remains unclear what his actions for student debt cancellation will look like.

Senate Majority Leader Chuck Schumer (D-N.Y.) and Sen. Elizabeth Warren (D-MA) have called on Biden to cancel up to $50,000 of student loan debt per borrower.

A source familiar with the discussions told FWRD AXIS News that no decision has been made as of yet but it is highly possible any form of forgiveness or debt cancellation policy would be linked to income as it did with Biden’s stimulus checks under his American Rescue Plan. 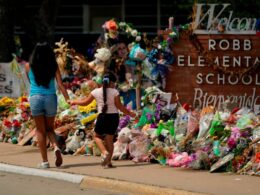 Devastation ensued as New Orleans, Louisiana was caught in its most “catastrophic” storm on the 16th anniversary of Hurricane Katrina.Thank…
byMiamii Mansour

The President made his first primetime address since taking office, hours after signing the $1.9 trillion Covid-19 relief package into law.
byStephen Michael