The two leaders shook hands before entering Villa La Grange after Swiss President Guy Parmelin welcomed them to Switzerland for the summit. The two meetings took place with the staff of the two world leaders by their side, something former President Donald Trump did not do.

Both men held separate press conferences following the meeting. Biden described it as “good” and “positive”, while Putin said it was “constructive” and there was a “glimpse of hope” regarding mutual trust.

“The meeting was actually very efficient,” Putin said through a translator. “It was substantive, it was specific. It was aimed at achieving results, and one of them was pushing back the frontiers of trust.”

Putin continued to deny Russia’s role in the recent cyberattacks, deflected questions about Russian opposition leader Alexei Navalny, and human rights abuses in his country. Instead, the Russian president focused on the attack on the U.S. Capitol in January and gun violence.

“I told President Putin my agenda is not against Russia or anyone else. It’s for the American people,” Biden said.

I also told him that no president of the United States could keep faith with the American people if they did not speak out to defend our democratic values, to stand up for the universal and fundamental freedoms,” Biden continued. “So human rights are always going to be on the table, I told him.”

The Russian leader praised Biden for his decision to agree to extend the New START nuclear treaty. Putin said the two sides had agreed to open “consultations” on cyberattacks but denied Russia was behind them, saying the U.S. is where most cyberattacks are originating from.

Putin refused to utter Navalny’s name and attacked a reporter for asking why all his political opponents were dead, in prison or poisoned. He then deflected to accuse the United States government of unfairly prosecuting the rioters who attacked the U.S. Capitol.

“Everything to do with the deterioration of our mutual relations was initiated not by us but by the USA,” Putin said. “There’s no happiness in life. There’s only a mirage on the horizon, so we’ll cherish that.”

Biden did not make any threats at the meeting but said the U.S. will respond if Russia attempted to interfere in its elections again and that there would be “devastating” consequences if Navalny died while in prison.

While Biden did not make threats, he did give Putin a list of 16 items he considered to be off limits. Some of those items included critical infrastructure such as cyberattacks and the U.S. water supply.

“The bottom line is I told President Putin that we need to have some basic rules of the road that we can all abide by,” Biden said.

Putin departed Geneva first before Biden boarded Air Force One at 2:41 PM ET to return to the United States. 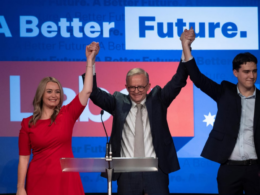 The result is a sharp rebuke to the center-right government, ending nine years of conservative leadership.
byStephen Michael