U.S. District Court Judge Kathryn Kimball Mizelle said the CDC had overstepped its legal authority by installing the mandate back in February 2021.

(Fwrd Axis) — A federal judge on Monday called the Centers for Disease Control and Prevention’s mask mandate that all travelers must wear masks on airplanes, buses, trains, and other public transportation “unlawful”, overturning the rule.

U.S. District Court Judge Kathryn Kimball Mizelle said the CDC had overstepped its legal authority by installing the mask mandate back in February 2021 despite coronavirus cases rising in much of the country. The CDC last week announced an extension until May 3 as a result of cases once again rising due to the BA.2 subvariant of omicron.

Despite the rise in cases, hospitalizations are at their lowest levels since the beginning of the pandemic, which in part, is due to the increase in Americans getting vaccinated. 21 states have sued the Biden administration for not letting the current requirements expire.

“Therefore, TSA will not enforce its Security Directives and Emergency Amendment requiring mask use on public transportation and transportation hubs at this time,” the official said.

The suit, filed by two women and the Health Freedom Defense Fund, Wyoming nonprofit, alleges the CDC mandate was “arbitrary and capricious” due to the fact it does not recognize anxiety and should qualify as a medical exemption to the CDC rule.

It does exempt children under 2 years old.

White House press secretary Jen Psaki was asked about the ruling on the mask mandate during a Monday briefing and called it “disappointing”.

“This is obviously a disappointing decision. The CDC continues recommending wearing a mask on public transit,” she said.

“Right now the Department of Homeland Security, who would be implementing, and the CDC are reviewing the decision and of course, the Department of Justice would make any determinations about litigation,” she added.

The Justice Department declined to comment and while it was not officially said, it appears the administration will not appeal the ruling. 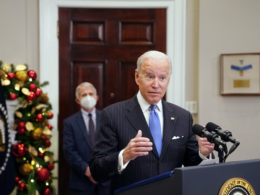 Biden Says Omicron Variant ‘A Cause For Concern, Not Panic’

Biden said the new variant would reach the U.S., but added omicron is not a cause for panic but concern.
byStephen Michael

The end of the mask mandate in Texas makes it the largest state to end the rule put in place to prevent the spread of COVID-19.
byStephen Michael