In celebration of the 50th anniversary of George Harrison’s monumental masterpiece, All Things Must Pass, the album has been completely mixed from the original tapes and expanded with 47 (42 previously unreleased) demos and outtakes, allowing listeners to enjoy and explore the album and the legendary recording sessions like never before. Decades in the making and lovingly crafted by the Harrison family, the album was remixed to fulfill Harrison’s longtime desire. Executive produced by Dhani Harrison and mixed by triple GRAMMY® Award-winning engineer Paul Hicks (The Beatles, The Rolling Stones, John Lennon), with the product produced by David Zonshine, the new mix transforms the album by sonically upgrading it – making it sound brighter, fuller and better than ever.

To coincide with the release of the anniversary editions, the iconic cover of All Things Must Pass, depicting Harrison and his garden gnomes, has been recreated in larger-than-life fashion as a public, living art installation in London’s Duke Of York Square, King’s Road, Chelsea. The installation opens today and will be available to visit until August 20.

Designed by world renown floral artist Ruth Davis, of All For Love London, the beautiful, interactive installation features gigantic versions of two gnomes which have been created out of flowers and foliage. The oversized gnomes, the largest measuring five meters, sit atop a large circle of turf, a meaningful, sacred shape and are surrounded by the seasonal, impermanent beauty George embraced during his life. In the center is a wooden stool and an exaggerated pair of rubber gardening boots, similar to the ones seen on the cover, inviting people to take a seat, put their feet in the boots and create their version of the classic album photo while enjoying the garden.

All Things Must Pass has only grown in influence and stature in the half-century since its initial release, including induction in the GRAMMY® Hall of Fame and inclusion on The Times of London’s “The 100 Best Albums of All Time” and Rolling Stone’s 2020 listing of “The Top 500 Albums of All Time.”

For more information, and to order the beautifully packaged editions, visit GeorgeHarrison.com. 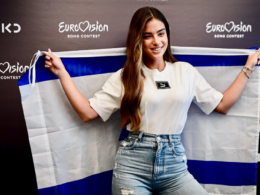 TEL AVIV, Israel (Fwrd Axis) – After a false start almost one month ago, it was confirmed on Wednesday that…
byChris Hockman