The President will try and use Tuesday’s speech to emphasize the job the United States has done to be the leader in the fight against Russia.

WASHINGTON (Fwrd Axis) — With Americans dealing with record-high inflation, the coronavirus pandemic, and worries about the fallout of Russia’s war in Ukraine; President Joe Biden will hope to calm a worried nation and world in his first State of the Union address on Tuesday night.

Biden comes into his first State of the Union address with his approval rating hovering around the low 40 percent range while 53 percent disapprove of how the job he is doing as President, according to FiveThirtyEight’s tracker. The President will try and use Tuesday’s speech to emphasize the job the United States has done to be the leader in the fight against Russia. While inflation has taken away the positive news about the economy, Biden will try to promote the condition of the economy and present an optimistic view of the country’s future.

“Every State of the Union address is an opportunity for the president delivering it to speak directly to the American people about what is happening at that moment, the progress being made and also the challenges we’re facing,” White House press secretary Jen Psaki said in an interview on MSNBC Monday afternoon. “Certainly, what we’re seeing on the ground in Ukraine, the fact that the president has built a coalition of countries around the world to stand up against Russia and Putin and put in crippling sanctions, that is part of what people will hear.”

Biden and his team have been working around the clock on his speech and with no public events on his schedule prior to Tuesday’s speech, he will likely make final tweaks leading up to the final hours.

Despite his administration’s successes such as the rollout of millions of vaccine doses, a coronavirus pandemic relief plan that reduced child poverty, and a sweeping bipartisan infrastructure law; Biden’s presidency has been plagued by rising inflation, the pandemic, his sweeping social spending, and climate change bill have stalled in Congress, along with foreign affairs overseas.

Tuesday night gives the President the chance to offer an optimistic look on the economy and will mention “entrepreneurship and business investment has rebounded, the economy achieved its fastest job growth in American history, the fastest economic growth in nearly 40 years and a faster recovery than every other advanced economy in the G-7,” said a senior administration official.

Biden will address the rising inflation and the fears of it growing more with the fallout from Russia’s attack on Ukraine. A recent poll shows the topic is the first that Americans have listed as of their top concerns and the President is expected to promote fair competition, help small businesses and do away with the barriers to better-paying jobs. 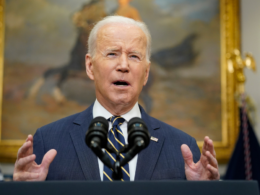 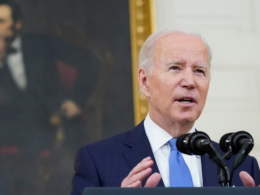 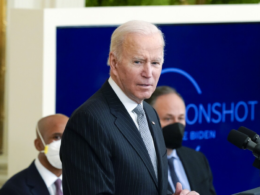 Biden said the ultimate goal is ending a disease that kills more than 600,000 people a year.
byStephen Michael