400 lights along the perimeter of Lincoln Memorial Reflecting Pool were turned on in hour of the 400,000 lives lost to COVID-19.

WASHINGTON – On the eve of his inauguration, President-elect Joe Biden led the nation in mourning the 400,000 people who have died in the coronavirus pandemic.

Speaking at the Lincoln Memorial Reflecting Pool, Biden acknowledged the risks and sacrifices nurses have made during the pandemic.

“To heal we must remember,” Biden said. “It’s hard sometimes to remember. But that’s how we heal. It’s important to do that as a nation.”

In a tribute, 400 lights were turned on along the perimeter of the Reflecting Pool, each one representing a thousand people lost to the coronavirus. The lights created an illuminating effect on its north and south sides of the pool, providing beautiful shots.

Vice President-elect Kamala Harris joined Biden along with their spouses All wore masks against the pandemic as they looked on while gospel singer Yolanda Adams sang “Hallelujah”.

“Between sundown and dusk, let us shine the lights in the darkness along this sacred pool of reflection and remember all who we lost,” Biden said.

Hundreds of other towns and cities took part in the tribute. New York’s’ Empire State Building and the Space Needle in Seattle were also illuminated with lights and were later joined by San Francisco and Pennsylvania.

The tribute comes as the United States hit another tragic milestone – nearly 400,000 deaths – Biden prepares to take control of a country bitterly divided in the midst of three different crisis’ at the same time. On the National Mall, there are “Field of Flags” for those who would have attended the inauguration were it not for the pandemic.

“We gather tonight, a nation in mourning, to pay tribute to the lives we lost,” Harris said. “For many months, we have grieved by ourselves. Tonight we grieve together.”

Biden campaigned on listening to scientists to combat the virus and unveiled a $1.9 trillion COVID-19 relief bill last week, calling it the American Rescue Plan. He also released a plan that seeks to get 100 million Americans vaccinated with the COVID-19 vaccine within 100 days. 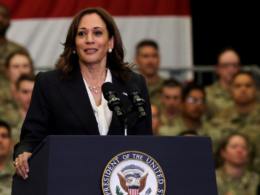 Harris has not been in close contact with President Joe Biden or first lady Jill Biden.
byStephen Michael

The President made his first primetime address since taking office, hours after signing the $1.9 trillion Covid-19 relief package into law.
byStephen Michael 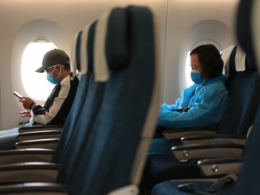 (Fwrd Axis) — The Biden administration has approved the extension of the mask mandate for all travelers on airplanes, trains,…
byStephen Michael