Biden accuses the Trump Administration of acting “irresponsibility” over lack of communication with his team.

WILMINGTON, Del. – President-elect Joe Biden said his transition team has “encountered roadblocks” with President Donald Trump’s administration from the Defense Department and the Office of Management and Budget in a speech on Monday.

Speaking from Wilmington, Delaware, after being briefed by his national security and foreign policy agency review teams, Biden said his transition team has not been able to get what they need in order to properly have the correct information to be ready on day one of the Biden administration.

“We just aren’t getting all the information that we need from the outgoing administration in key national security areas,” Biden said. “It’s nothing short, in my view, of irresponsibility.”

The President-elect spoke around 25 minutes and took no questions from the press. He went on to say his team needs to be briefed on key issues around the world so that can deter any foreign enemies from trying to take advantage of the country moving forward.

“My team needs a clear picture of our force posture around the world and our operations to deter our enemies,” he said. “We need full visibility into the budget planning underway at the Defense Department and other agencies in order to avoid any window of confusion or catch-up that our adversaries may try to exploit.”

“This bombing was a reminder of the destructive power of an individual or a small group can muster and the need for continuing vigilance across the board,” he said.

Mr. Trump has neither condemned the bombing nor offered any public comments on the Christmas Day bombing in Nashville.

During his campaign and throughout his transition Biden has vowed to undo Mr. Trump’s “America First” foreign policy and restore the United States’ reputation around the world. The President-elect promised to rebuild international alliances while noting issues like the coronavirus pandemic and the climate crisis require the U.S. to work together with other countries.

Biden knows he is coming into office next month and will be inheriting a number of issues such as the coronavirus pandemic, which as killed 333,000 Americans as of Monday morning.

One of those issues will be giving relief to millions of Americans who have lost their job or have no way to pay the bills. President Trump signed the $2.3 trillion coronavirus relief bill on Sunday after a lengthy deal that resulted in more Americans losing out on key benefits.

As Biden finished his remarks, he was asked by a reporter if he supports $2,000 stimulus checks for all Americans.

After weeks of delays and falsely claiming victory, Biden's transition is finally going ahead
byStephen Michael 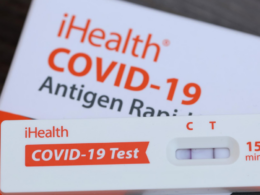