The committee heard from former Pence attorney Greg Jacob and retired Republican judge J. Michael Luttig, who both advised Pence that he did not have the authority to subvert the election.

The committee heard from former Pence attorney Greg Jacob and retired Republican Judge J. Michael Luttig, who both advised Pence that he did not have the authority to subvert the election. The focus then turned to Trump attorney John Eastman’s conspiracy theory that Pence could overturn the election and Trump’s actions that followed, leading to Pence fearing for his life.

Much of the day focused on former Vice President Mike Pence but the most shocking testimony came when it was revealed Trump was repeatedly told that his plan for Pence to overturn the election on January 6 was illegal, but he didn’t care.

Pence himself and Eastman, who came up with the idea, both told Trump the plan was unconstitutional and violated federal law. Pence’s chief of staff Marc Short said Pence advised Trump “many times” that he didn’t have the legal or constitutional authority to overturn the results of the election.

“Donald Trump wanted Mike Pence to do something no other Vice President has ever done: the former President wanted Pence to reject the votes and either declare Trump the winner or send the votes back to the states to be counted again,” panel Chairman Bennie Thompson (D-Miss) said.

Jacob said Eastman himself admitted the plan would require Pence to violate federal law, despite Eastman coming up with the idea.

Despite Trump and Eastman knowing the plan was illegal, both men went forward with it. This put massive pressure on Pence, who then was fearing for his life. At the January 6 rally, Trump falsely claimed the election was rigged against him, and Pence had the power to overturn the results.

Several of the rioters saw Trump’s tweet criticizing Pence as it happened while the Capitol was under attack. This led to anger among those at the Capitol, saying Pence was a “traitor”.

“Mike Pence has betrayed the United States of America…and we will never ever forget,” a rioter says.

“And he said words to the effect of, ‘There’s been violence in the history of our country in order to protect the democracy, or to protect the republic,’ ” Herschmann said.

Trump pressured Pence in a heated phone call on the morning of January 6, calling his own vice president a “wimp” and “a p***y, according to recorded testimony from Julie Radford, a former chief of staff to Ivanka Trump, the president’s daughter.

Pence didn’t have the courage to do what should have been done,” Trump tweeted later.

Ivanka Trump said the discussion became “pretty heated” and that her father used a “different tone” than he had with Pence in the past.

Eastman emailed Trump’s Rudy Giuliani to ask to be put on a list of potential recipients of a presidential pardon, the committee revealed.

“I’ve decided that I should be on the pardon list if that is still in the works,” the email from Eastman to Giuliani read.

Eastman did not receive a pardon and did not cooperate with the committee, pleading the Fifth during his deposition over 100 times.

The committee argued that Eastman’s request for a pardon, and his repeatedly pleading the Fifth when questioned previously by the panel, indicates Eastman knew his actions were potentially criminal.

If not for Pence, America wouldn’t be the same

Jacob said Thursday that if Trump was successful, there would have been short-term and long-term consequences – political chaos with lawsuits and unrest in the streets.

“I would have laid my body across the road before I would have let the vice president overturn the 2020 election,” said Luttig. “There was no basis in the Constitution, or the laws of the United States — at all — for the theory espoused by Mr. Eastman, at all. None.”

However, it was Luttig’s last statement that highlighted how important these hearings are for the future of American politics and democracy.

“Donald Trump and his allies are a clear and present danger to American democracy,” Luttig said. “To this very day, the former president, his allies and supporters, pledge that in the presidential election of 2024, if the former president or his anointed successor … were to lose that election, that they would attempt to overturn that 2024 election in the same way that they attempted to overturn the 2020 election.

“I don’t speak those words lightly,” Luttig said. “I would have never uttered one single one of those words unless the former president and his allies were candidly and proudly speaking those exact words to America.” 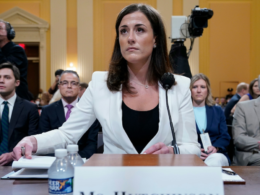 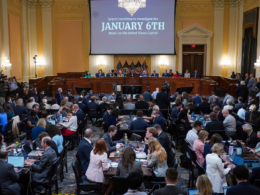 Manchin said he tried "everything humanly possible" to try to get the deal done.
byStephen Michael