INGLEWOOD, Calif. (Fwrd Axis) — The Los Angeles Rams used a fourth quarter rally to defeat the Cincinnati Bengals 23-20 in front of a home crowd at SoFi Stadium to win Super Bowl XLI and capture their first championship since their move back to California.

The championship was the first for the Rams as an L.A. team and their second in franchise history. Los Angeles, playing in front of their home crowd, scored in the first seven minutes of play but the Bengals responded with a field goal to make it a 7-3 game.

Los Angeles took back the lead when quarterback Matthew Stafford found Cooper Kupp in the end zone but a missed extra point make it a 10-point lead for the Rams. Cincinnati answered back with a 6-yard trick-play touchdown pass from running back Joe Mixon to Tee Higgins to make it 13-10 Los Angeles at halftime.

Following a star-studded halftime show, the Bengals opened the second half with a touchdown after quarterback Joe Burrow found Higgins for a 75-yard touchdown pass in just 12 seconds to take the lead at 17-13. After a Stafford interception, the Bengals settled for a field goal to make it 20-16.

Both quarterbacks suffered injuries in the game with Stafford limping off the field and Burrow, who was hurt on a fourth-quarter sack. Both stayed in the game as Stafford went downfield and hit Kupp to give the 23-20 lead. The Bengals had one last chance to tie or win the game but Los Angeles’ defense stood tall as Aaron Donald sacked Burrow to seal the Super Bowl XLI victory and win the Vince Lombardi Trophy.

JOE MIXON THREW A TD IN THE SUPER BOWL. #RuleItAll

“So many contributions,” Rams head coach Sean McVay said. “It’s about the team. I’m so happy for these players.”

Kupp was named the game’s MVP and said after the game he was not deserving of the award because it was a team effort.

“I’m not really deserving of this,” he said of his MVP award.

For Cincinnati, the loss ends what was a cinderella season after they went 4-12 just a season ago. Burrow in just his third season led the Bengals to the playoffs and their first playoff victories. Bengals coach Zac Taylor had nothing bad to say about his team’s season.

“It’s a hard road to get to the Super Bowl,” he said. “I’ll never take this group for granted.” 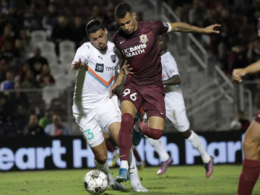