Pelosi says Congress may move towards impeachment if 25th Amendment is not used.

Speaking at a news conference on Thursday, Ms. Pelosi called for the use of the 25th Amendment following a mob of Mr. Trump’s supporters breached the U.S. Capitol with violence for hours on Wednesday.

“I join the Senate Democratic leader in calling on the vice president to remove this president by immediately invoking the 25th Amendment,” Pelosi said. “If the vice president and Cabinet do not act, the Congress may be prepared to move forward with impeachment.”

When asked if she will have to wait long to get a response from Vice President Pence, Ms. Pelosi said “It will be ‘yes’ or it will be ‘no,'” but as of Thursday night Mr. Pence had not responded to her call.

Ms. Pelosi’s comments came hours after Mr. Schumer released a statement calling for the same actions to be taken.

“The quickest and most effective way — it can be done today — to remove this president from office would be for the vice president to immediately invoke the 25th amendment,” he said.

Mr. Schumer also had a press conference, where he detailed that he and the House Speaker attempted to call Mr. Pence Thursday morning to tell him to invoke the 25th.

“They kept us on hold for 25 minutes and then said the vice president wouldn’t come on the phone,” Schumer said. “So we are making this call public because he should do it and do it right away.”

The calls from Democrats to impeach the President for a second time were met with similar calls from some of the Republicans. Illinois Rep. Adam Kinzinger, the most outspoken Republican against Mr. Trump, called for him to be removed from office.

However in a press conference of his own, Sen. Lindsey Graham, R-S.C., a loyal Trump ally, said he does not support removing Trump from office yet.

But he added: “Now, if something else happens, all options would be on the table.” 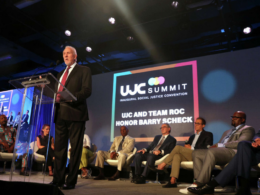 Spurs’ Gregg Popovich Blasts Racial Injustice In U.S.: “Where The Hell Do I Live?”

Popovich made the remarks while presenting an award to Innocence Project co-founder Barry Scheck.
byCarolina Teague