Mr. Biden holds a 54 percent-44 percent advantage over Mr. Trump in the head-to-head matchup, unchanged from a month ago. However, Mr. Biden’s lead support slips to 49 percent when Libertarian candidate Jo Jorgensen and Green Party candidate Howie Hawkins are added in while Mr. Trump has 43 percent.

Both the Libertarian and Green Party candidates could be somewhat of an issue for the former Vice President on Election Day in close battleground states as he loses more support than the president in a four-way matchup.

Meanwhile, with a little over a month until the election, the numbers continue to look bad for President Trump. He’s currently at 44 percent approval among all Americans while his disapproval number is at 53 percent. 52 percent of Americans believe the president has done well handling the economy while 40 percent support his handling of the coronavirus pandemic.

58 percent of Americans feel Mr. Trump has not done well handling the coronavirus pandemic, a key figure for Mr. Biden maintaining his lead.

What is going to matter in this election is the turnout for both candidates, which is growing more and more complicated due to coronavirus concerns. The poll finds 46 percent of likely voters will cast their vote in-person on Election Day, while 50 percent plan to vote early or absentee. These numbers are extremely important as the data shows Mr. Trump leading 19 points among those who plan to vote in-person on Election Day while Mr. Biden holds a 67%-31% edge on those who plan to vote early.

Lastly, the issues will be the thing that drives voters to the polls. 62 percent of voters worry that they or a family member may catch the virus. Likely voters who expressed this concern showed support for Mr. Biden 71 percent to 27 percent. However, there is some bad news for the Democratic presidential nominee on this front as well. He has lost some trust among voters to handle the pandemic. He once held a 54–34% lead in this area over the summer but it has now shrunk to 51%-40%.

The issue of the economy is much better news for Mr. Trump. 40 percent of voters say it is in good shape, up nine points from last month, while the president holds a 49%-46% lead on Mr. Biden on who is best to handle the economy.

While Mr. Trump has pegged himself the “law and order” candidate, it is the former Vice President who is ahead in trust to handle it, 50%-44%. A surprising note is just 11 percent of voters are concerned about a Supreme Court nominee but Mr. Biden leads by eight points in trust to handle the next Supreme Court nomination. He also edges Mr. Trump by 11 points on the pandemic, 16 points on health care, and 20 points on equality for racial groups

The first of three presidential debates will take place Tuesday night in Cleveland. 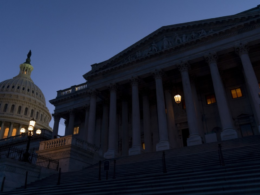