Former Rep. and Democratic presidential candidate Beto O’Rourke is planning to run for governor of Texas in 2022, with an announcement expected later this year, according to reports.

O’Rouke is reportedly hoping the bid for governor can be the start of his political comeback after he flamed out in a run for the White House in 2020 and challenging Texas Gov. Greg Abbott is the way he plans to do that.

Axios was the first to report of O’Rourke’s intentions to run for governor.

“No decision has been made,” said David Wysong, O’Rourke’s former House chief of staff told Axios. “He has been making and receiving calls with people from all over the state.”

If O’Rourke enters the race, it would give Democrats a high-profile candidate with a massive fundraising arm to challenge Texas Republicans. A new poll from the Dallas Morning News shows O’Rourke trailing Abbott 52%-47% in a hypothetical matchup, down from the 12-point deficit he faced in July. Abbott’s approval ratings have taken a hit over his handling of the coronavirus with 50 percent disapproving.

Abbott championed and later signed a law that criminalizes abortions six weeks after conception, angering Democrats and women across the state.

“We hope that he’s going to run,” Gilberto Hinojosa, the state chair of the Democratic Party, told Axios. “We think he’ll be our strongest candidate. We think he can beat Abbott because he’s vulnerable. And with the abortion law, Republicans have raised the anger level of Texas women higher than anyone has ever seen before.”

O’Rourke raised a record-breaking $80 million in his failed 2018 Senate race against Sen. Ted Cruz (R-TX). O’Rourke has been calling political allies and seeking their advice, reportedly “leaving them with the impression that he’s made his decision to run.”

If O’Rourke enters the race, he may face competition. Reports state actor Matthew McConaughey is seriously mulling over a decision to run for governor but has not said which party he would represent if he did start a political bid. A poll shows McConaughey leads Abbott in a potential matchup. 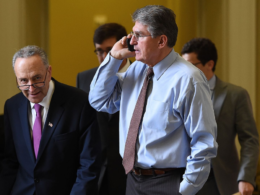 Biden met with the two men as he tries to hammer out a deal on two key pieces of legislation before he departs the country on Thursday.
byStephen Michael

The report is just the latest among several that Trump is beginning to believe his own lies of baseless claims of voter fraud.
byStephen Michael