(Fwrd Axis) — Will Smith on Friday resigned from the Academy of Motion Picture Arts and Sciences, following his slap of comedian Chris Rock at the Oscars was seen worldwide caused uproar in Hollywood.

Smith won the best actor award for his role in “King Richard” but has faced disciplinary action and possible expulsion for his actions prior to winning the award, which shocked the audience both at the Dolby Theatre and viewers watching at home.

“I betrayed the trust of the Academy,” Smith wrote in his statement. “I deprived other nominees and winners of their opportunity to celebrate and be celebrated for their extraordinary work. I am heartbroken.”

“My actions at the 94th Academy Awards presentation were shocking, painful, and inexcusable,” Smith said. “The list of those I have hurt is long and includes Chris, his family, many of my dear friends and loved ones, all those in attendance, and global audiences at home.”

Smith hit comedian Chris Rock for a joke about the actor’s wife, Jada Pinkett Smith. Rock was presenting the award for best documentary feature, said that he was excited to watch Pinkett Smith in “G.I. Jane 2″, a 1997 movie starring Demi Moore as a woman who joins the Navy and shaves her head during her military service.

Smith laughed but looked uncomfortable while Pinkett Smith rolled her eyes and stared at Rock. Smith then got up from his seat and smacked the comedian in the mouth. The U.S. broadcast censored the next moment but live streams overseas picked up the moment as it happened.

“Wow, wow … Will Smith just smacked the shit out of me,” a surprised Rock said.

“Keep my wife’s name out of your fucking mouth!” Smith screamed when he returned to his seat.

Rock looked visibly shaken by the moment and paused before saying, “That was the greatest night in the history of television”. He then continued with his presenter bit. A live feed of the commercial break showed actors Denzel Washington and Tyler Perry comforting Smith, who wiped tears from his eyes as he sat back down with Pinkett-Smith.

On Monday, Smith apologized to Rock on Instagram, saying he was embarrassed and that violence is never acceptable. 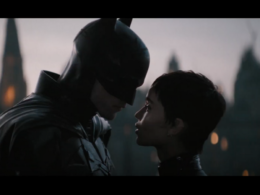