Greene called the decision by 11 Republicans to vote with Democrats to remove her from the committees Thursday a “big betrayal”.

WASHINGTON — Less than 24 hours after the House voted her off two committees, Marjorie Taylor Greene attacked Democrats, the media and some Republicans while declaring the Republican Party “belongs” to former President Donald Trump.

Speaking at a press conference outside the Capitol on Friday, Greene said the vote to remove her from both the House Budget Committee and House Education and Labor Committee was not fair to those who voted for her.

“Free speech really matters, and yesterday, when the Democrats and 11 of my Republican colleagues, decided to strip me of my committee assignments — Education and Labor and the Budget Committee — you know what they did? They actually stripped my district of their voice,” Greene said.

“I’m fine with being kicked off committees because it’d be a waste of my time,” Greene added.

Greene slammed President Joe Biden and the Democrats, calling it a “tyrannically controlled government” where Mr. Biden is passing his policy agenda through executive orders.

“They don’t care what Republicans have to say,” she said.

Greene also praised former President Donald Trump, saying “the party is his” and “it doesn’t belong to anyone else.” She called the decision by 11 Republicans to vote with Democrats to remove her from the committees Thursday was a “big betrayal” and “could cost us the majority in 2022”.

Thursday’s decision to remove Greene came after videos and past comments of Greene surfaced on social media, where she supported QAnon conspiracy theories, embraced calls for violence against top Democrats and suggested the Sandy Hook and Parkland school shootings were staged.

When asked by a reporter if Greene should apologize for saying that House Speaker Nancy Pelosi is guilty of treason, “a crime punishable by death,” she did not apologize. Instead, she attacked the reporter and asked him to apologize for stories about Russian “collusion,” which Greene claimed were fake — in true Trump form.

“I’m sorry for saying all those things that are wrong and offensive, and I sincerely mean that,” Greene said of her supporting QAnon theories. And I’m happy to say that. I think it’s good to say, say when we’ve done something wrong.”

How Gen Z Can Save The Election By Working The Polls 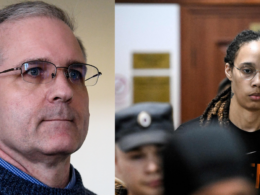