BLACKENED American Whiskey’s “Masters of Whiskey Series” builds upon the brand’s core tenant of collaboration, converging the passions, talents, and skills of two master whiskey makers to create new, distinctive expressions. This latest release is crafted from a base of six-year-old Kentucky straight bourbon and finished in White Port wine casks. Dietrich and Henderson both have extensive backgrounds in Port wine finishes and knew they wanted to use that expertise for this whiskey. After exploring several finishes, they jointly sourced and selected a unique white port wine as the cask finish, that balanced well with the depth of the bourbon. The resulting whiskey features notes of pear, raisin, cinnamon, and cigar box on the nose and hints of pear, honey, chipotle cinnamon, vanilla, barn hay, and walnut on the palate. 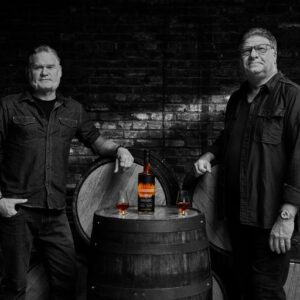 During finishing, the whiskey undergoes a sonic enhancement process in which the finishing barrels are pummeled by the low hertz frequencies of Metallica’s music. The sound waves cause vibrations that shake the finishing barrels, causing greater interaction between the whiskey and the wood, thereby extracting more flavors and color. The expression is bottled at cask strength and is non-chill filtered.

“I love rye, so for the first release of the Masters of Whiskey Series, we created a cask-finished rye,” explained Rob Dietrich. “It was only natural that our next release should be a bourbon. But like everything we do, we couldn’t create just any bourbon; it needed to be uniquely different. To do that, we partnered with one of the most renowned names in the industry: Wes Henderson. It was a true honor getting to work with Wes and learn how our palates aligned together in the process. His close friendship with Dave Pickerell sparked some of the concepts we designed for this whiskey. We’ve created something truly special that I hope whiskey enthusiasts will enjoy as much as we did making it.” 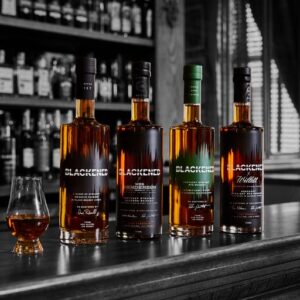 “We don’t do anything halfway,” said Metallica’s lead guitarist, Kirk Hammett. “We partnered with our Co-Founder, the late, great, Dave Pickerell, to bring you our badass original blend – now helmed by the amazing Rob Dietrich, Willett Distillery to bring you an explosive rye, and Wes Henderson to create this outstanding bourbon. That’s the really cool thing about the ‘Masters of Whiskey Series’ – we build on our core idea of collaboration, getting to work with these insane Master Distillers and Blenders to innovate and bring new expressions to our fans and whiskey drinkers.”

The inspiration for the collaboration with Henderson came from BLACKENED’s late Master Distiller and whiskey luminary, Dave Pickerell. Henderson and Pickerell were close friends and were both revered in the whiskey industry as innovators and makers. Further, Henderson’s background in bourbon made him a natural partner for the project. Kentucky whiskey royalty, he represents several generations of distilling provenance and was inducted into the Kentucky bourbon hall of fame, joining his father, Lincoln Henderson, as one of the few father/son inductees in the history of the industry.

Given so many connections to Kentucky, and as much of the region is still recovering from 2021’s devastating tornadoes, the team at BLACKENED, Rob Dietrich, and Wes Henderson felt it was of the utmost importance to help the community through this release. With Dietrich a veteran of the 10th Mountain Division and Henderson a first responder and death coroner, BLACKENED reached out to Metallica’s nonprofit All Within My Hands Foundation for suggestions on organizations who serve Kentucky and who align with their values and goals. They were introduced to Team Rubicon, a veteran-led, non-profit organization that serves global communities before, during and after disasters and crises.

To support the team and specifically the rebuild efforts in Western Kentucky, BLACKENED will donate $25,000 to Team Rubicon. Metallica and All Within My Hands will match this donation in kind, making the overall total donation $50,000. If you would like to learn more or to make a donation to Team Rubicon, we encourage you to please visit their website at donate.teamrubiconusa.org.

“I didn’t think I’d be working on another whiskey so soon after my retirement, but I couldn’t pass this up,” said Wes Henderson, Co-Founder and former Chief Innovation Officer of Angel’s Envy. “As a close friend of Dave’s, I’ve been watching BLACKENED for a while now and have been impressed with Rob, the team, and with what they’ve created. It was an incredible experience getting to work closely with Rob, compare palates and use our respective skill sets in cask finishing to develop this flavor profile. We both have a very similar approach to whiskey – that it takes drinkers on a journey. I believe we accomplished that with this expression, and the fact we were able to tie-in a charity that’s serving the community of Western Kentucky, which is so near and dear to my heart, is amazing. I can’t wait for others to try it!”