The strike was ordered by President Biden, marking his first military known action since he took office.

WASHINGTON — The United States has carried out an airstrike against Iran-backed militia in Syria following rocket attacks against U.S. forces in Iraq, the Pentagon has confirmed.

The strike was ordered by President Joe Biden, marking his first military known action since he took office. While the site was not specifically tied to the rocket attacks, they are believed to be used by Iranian-backed Shia militias.

“At President Biden’s direction, U.S. military forces earlier this evening conducted airstrikes against infrastructure utilized by Iranian-backed militant groups in eastern Syria,” Pentagon spokesman John Kirby said in a statement. “These strikes were authorized in response to recent attacks against American and Coalition personnel in Iraq, and to ongoing threats to those personnel.”

The site of the attack is believed to be used as a weapons smuggling operation by the militias. The strikes come amid talks between Washington and Tehran as the two prepare to enter negotiations about Iran’s nuclear program.

“This proportionate military response was conducted together with diplomatic measures, including consultation with Coalition partners,” he said. “The operation sends an unambiguous message: President Biden will act to protect American and Coalition personnel. At the same time, we have acted in a deliberate manner that aims to de-escalate the overall situation in both eastern Syria and Iraq.”

The United States has not placed blame on anyone for the rocket attacks but the Biden administration had made it clear where the blame falls. Earlier this week White House Press Secretary Jen Psaki said the United States is holding Iran accountable.

A rocket attack on Feb. 15 near the Erbil International Airport in Iraqi Kurdistan killed civilian contractor and injured four American contractors and a US service member.

Iran Foreign Ministry spokesman Saeed Khatibzadeh denied any relations or ties to the attack and has not claimed responsibility for any of the other strikes. 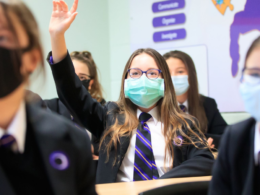 Biden and the first lady met with Queen Elizabeth II at her home in Windsor Castle on Sunday before he travels to Brussels.
byStephen Michael