Democrats are hoping to campaign on the success of the legislation in next year’s midterm election.

WASHINGTON (Fwrd Axis) — President Joe Biden on Monday signed a $555 billion infrastructure bill into law, giving him one of the biggest legislative victories of his young presidency to date.

The new bill will put billions of dollars into construction for roads, bridges, airports, and seaports. The bill will also provide an expansion on broadband internet, replace lead pipes and build electric vehicle charging stations.

“We’ve heard countless speeches and promises, white papers from experts, but today we’re finally getting this done,” Biden said at the signing ceremony. “So my message to the American people is this: America’s moving again, and your life is going to change for the better.”

With the signing of the bill, Democrats are hoping to campaign on the success of the legislation in next year’s midterm election. Biden has touted the bill as a once-in-a-generation investment and made it clear he’s heard the outcry from the American people about their concerns regarding the economy and the divisions in Washington.

“I know you’re tired of the bickering in Washington, frustrated by the negativity,” Biden said. “And you just want us to focus on your needs, your concerns and the conversations that are taking place at your kitchen table, conversations as profound as they are ordinary.”

The White House delayed the signing ceremony over a week due to Congress being in recess. Several Republicans who voted for the legislation declined to attend, including Senate Minority Leader Mitch McConnell, who said he had “other things I’ve got to do.”

Still, Biden thanked McConnell for his part in helping pass the bill. He also thanked Sens. Mitt Romney, Shelley Moore Capito, and Rob Portman. The Republicans who helped pass the bill have come under scathing attack by members of their own party and former President Donald Trump.

Vice President Kamala Harris spoke prior to the President, praising him for getting the bill passed after broken promises by the Trump administration. Over the weekend, reports surfaced claiming of dysfunction within the West Wing.

“We would not be here today were it not for your leadership, Mr. President,” she said. “From the very start, you welcomed Democrats, independents, and Republicans to meet with us in the Oval Office. You welcomed ideas. You welcomed debate, all in the service of getting this bill done.”

Monday’s signing ceremony kicks off a week of travel for the President. He will be in New Hampshire on Tuesday and in Michigan on Wednesday. Harris will visit Ohio on Friday to promote the bill.

With the bipartisan infrastructure deal now law, focus will shift to getting Congress to pass a separate $1.7 social spending package, which includes key Democratic priorities such as universal pre-K and programs to lower medical costs.

Biden’s approval ratings have been sliding since August and the White House is hoping the passing of both the infrastructure bill and social spending package, both of which are popular with the American people, will see him start to rebound. A recent ABC News/Washington Post poll shows Biden with 41 percent approving of the job he’s done in the first 10 months of his presidency. 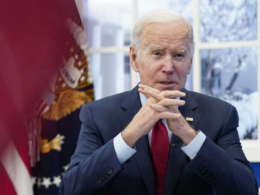 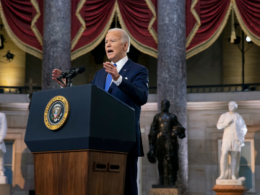 Speaking from Statuary Hall on the anniversary of the riot, Biden went after Trump without ever mentioning his name.
byStephen Michael 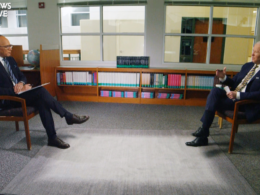