55 million people were affected by power outages after a record 7.4 inches of rainfall in the Northeast.

Airports ground to a halt with thousands left stranded as the storm waged on causing chaos. This comes after 17 long months of grueling lockdowns.

55 million people were affected by power outages after a record 7.4 inches of rainfall in the Northeast.

Initially dubbed ‘Hurricane Henri’, the now downgraded Storm Henri is said to be the biggest since Hurricane Irene in 2011, a meteorologist at National Weather Service has said.

Westerly resident Collette Chisholm said the waves were much higher than normal but wasn’t too concerned about the damage to her home.

“I love storms,” she told Politico. “I think they’re exciting, as long as no one gets hurt.”

Paul and Cherie Saunders were riding out the storm in Newport. Their basement flooded with 5 feet of water during Superstorm Sandy.

“This house has been through so many hurricanes and so many things have happened,” said Saunders. “We’re just going to wait and see what happens.”

Henri began shortly after a 22,000-strong crowd gathered in Central Park to enjoy performances by big-name stars in the ‘We Love NYC: The Homecoming Concert‘.

Revelers were out celebrating the end of lockdowns – listening to Barry Manilow – when the storm gathered pace, last Saturday.

The event, which was supposed to last several hours, got cut short to just two and a half thanks to Mother Nature.

However, not all is lost, as the storm seems to be slowing down, and De Blasio has even hinted that the concert may be rescheduled.

“I remember Irene and media outlets outside Vermont brushing it aside as if no big deal while it hit Vermont,” Robert Welch, a podcaster, tweeted Sunday. “I’ll relax when I see it at sea on the radar.”

Devastation ensued as New Orleans, Louisiana was caught in its most “catastrophic” storm on the 16th anniversary of Hurricane Katrina.…
byMiamii Mansour 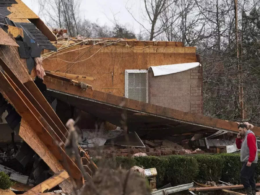 The city of Mayfield was one of the hardest hit after a roof collapse at a candle factory had resulted in mass casualties.
byStephen Michael