PALM BEACH, Fla. (Fwrd Axis) — Donald Trump, a twice impeached former president, launched a 2024 campaign to return to the White House on Tuesday night, just a week after a string of candidates he endorsed lost in the midterm elections.

Speaking from Mar-a-Lago, Trump spoke about his vision for America’s ‘comeback’ and promised to return the country to the so-called glory under his presidency.

“We have always known that this was not the end; it was only the beginning of our fight to rescue the American dream,” Trump said. “In order to make America great and glorious again, I am tonight announcing my candidacy for president of the United States.”

Trump touted Republicans’ success in the House, where they are on the cusp of gaining control from the Democrats. With the announcement, the former president becomes the front-runner for the Republican nomination despite ongoing investigations, one of which led to an insurrection at the U.S. Capitol on January 6, 2021.

Despite losing to President Joe Biden in 2020 by more than seven million votes, Trump still claims he won the election. The former president endorsed several candidates in the 2022 election including celebrity doctor Mehmet Oz in Pennsylvania, Don Bolduc in New Hampshire, and Kari Lake in Arizona. All of whom lost their respective races.

“America’s comeback starts right now,” Trump said, claiming, “Your country is being destroyed before your eyes.”

Trump running makes it more likely Americans will see a rematch with Biden, who turns 80 on Sunday. The President has said he intends to run in 2024.

Despite being impeached twice, Trump still has a stranglehold on the Republican party with six in 10 Republicans backing the former president for the nomination.

“This will not be my campaign, this will be our campaign all together,” Trump said. 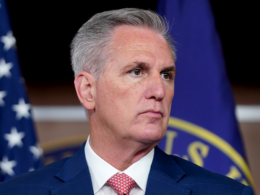 The New York Times was the first outlet that reported on Monday that the focus of the raid was regarding the National Archives materials.
byStephen Michael