Adele has released her longawaited and eagerly anticipated album, 30, her latest in six years!

To critics who question why she sticks to the same music “why would I shake up my sound?” asked Adele in a recent interview with The Face. “No one else is doing my sound, so why would I change it up?”

“I know what I’m good at. I really enjoy the music that I write. If I didn’t, then I wouldn’t be doing it.

‘When I’m consistent with the sound of my music and the style of singing that I do, I think that’s what – I believe – cuts through everything else. Because it’s not confusing. No one’s like: ​“What?”’

Adele confirmed that the album was inspired by her divorce from Simon Konecki and its affect on their nine-year-old son Angelo, and the rawness of it is unbelievable.

One track in particular, entitled ‘To Be Loved’, has garnered the most attention, with fans in floods of tears at the raw emotion portrayed on the ballad. I mean, breakups are very relatable, right?

The song has been described as a career highlight for the star, as she sings: ‘I built a house for love to grow/ I was so young that it was hard to know/ I’m as lost now as I was back then/ Always make a mess of everything.’

In ‘I Drink Wine’ and ‘Cry Your Heart Out’, the pain in her voice is evident – lyrics include: “I can’t get no relief, I’m so tired of myself/ I swear I’m dead in the eyes/ I have nothing to feel no more/ I can’t even cry.”

In Love Is a Game, she sings: “My heart speaks in puzzling quotes I’ve been trying my whole life to solve / God only knows how I’ve cried.”

Adele has remained fiercely private about her family life, and only shared minimal details of her split from Simon in the run up to her new music releasing. In a recent interview, she cited that she was the one to end it for no reason other than feeling “really not happy”.

If we’re talking favourite songs, mine has to be My Little Love. She shares candid voice notes of her son Angelo, and a heartbreaking conversation between her, and her son. That moment, for me, is unmatched.

Angelo can be heard trying to stop his mum crying, as she sings: ‘I’m so sorry if what I’ve done makes you feel sad’.

‘Tell me you love me’, Adele begs in one clip, as he replies: ‘I love you, one million per cent. I feel like you like me too.’

‘You know Mummy doesn’t like anyone else like I like you, right?,’ she continues. ‘Mummy’s been having a lot of big feelings lately, I’m confused and I don’t know what I’m doing.

Her debut track from 30, Easy On Me, was written with Angelo in mind, in a bid to address some of the questions he had over their divorce.

‘I just felt like I wanted to explain to him, through this record, when he’s in his twenties or thirties, who I am and why I voluntarily chose to dismantle his entire life in the pursuit of my own happiness,’ she told British Vogue in a candid chat.

‘It made him really unhappy sometimes. And that’s a real wound for me that I don’t know if I’ll ever be able to heal.’

One thing (apart from her vocals, modest and down-to-earth personality, and beauty) that I love about Adele is that even though she’s one of the biggest names in music, her son has no idea that she is a huge, Oscar-winning superstar.

In terms of the album itself, I’m still healing… What a truly poignant and spectacular work of art – both lyrically and melodically.

Contestants on AGT Extreme will compete against each other each week to be crowned the winner of a $500,000 prize.
byStephen Michael
Read More 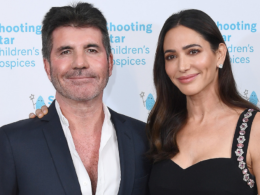 The 62-year-old television judge and music mogul got down on one knee during a family trip to Barbados.
byStephen Michael